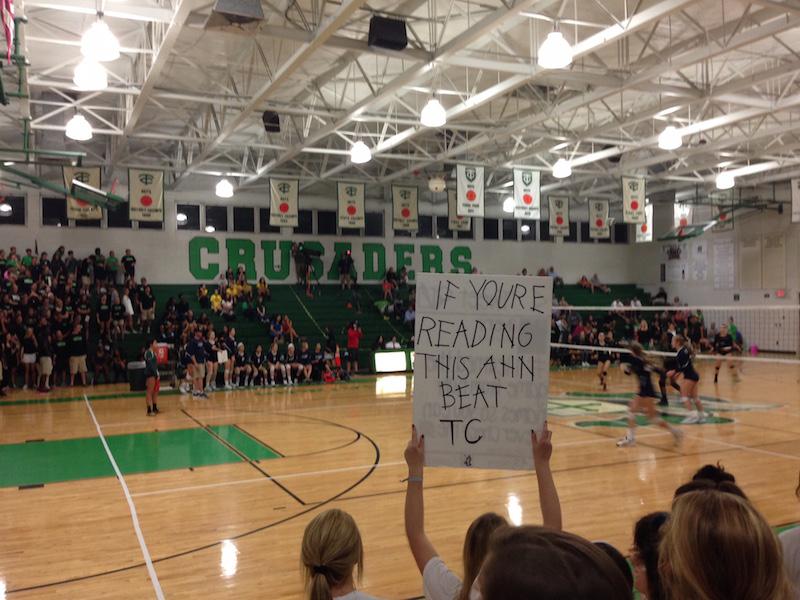 Credit: Chloe Paman This was the first game out of the season that the Jags have been chosen to be the Bright House Sports Network game of the week.

AHN’s volleyball team went head to head with Tampa Catholic the night of Wednesday, September 23. Competing against TC automatically made a pivotal game, but in addition, this was the first broadcasted game for the Jaguars. At 7 p.m., the game aired on Brighthouse Sport Network, a network solely for local high school sports.

The student section was filled with supporters from Academy and several students from Jesuit. The proud Jaguar fans stayed loud and energetic throughout the entire game. Junior Kendall Perez exclaims “the energy was so great and it was really fun. Everyone was so hyped up!”  At the beginning, both student section’s took  to their liberty to sing the national anthem together.

Ansley Cassidy and Chris Torello covered the game noted highlights and giving short backgrounds of some of the big players. The anchors briefly spoke about the players from AHN, highlighting Junior Camille Opp who plans to spend her college years playing district one volleyball at Tulane University in New Orleans. Torello commented that Opp was a big hitter adding, “she is very impressive on the outside. She dominates.” The broadcasters also mentioned that the Jaguar’s are strongest while playing offence.

Set one began with Prossen’s serve. The anchors continued pointing out the accomplishments of the girls so far this season, Prossen’s being that she has completed a total of seventy kills so far this season. The first of many rallies between the Crusaders and the Jaguars ended with one of Opp’s strong hits which was set up by Bulliet. Bulliet has over 400 assists which makes her #2 in the state for assists. Torello and Cassidy called her, “the quarterback of the team,” and add that, “she knows the rules, and doesn’t need anyone to tell her.”  Junior Ashley Lambert took the court to serve for the first time in the game. So far this season, the junior has completed ten aces. The entire first set, the score consistently stayed between a one to two point distance. As TC was about to score and win the first set, Opp came in with a kill tying the game at 24-24. Unfortunately, Tampa Catholic took the win for set one with a score of 29-27.

Set two started off with Prossen serving again. The anchors pointed out that Prossen is a, “fearless freshman,” for being on the varsity team. A highlight of set one was when Bulliet and Rosales made an incredible block, giving the point to the jags. Opp served three balls during the third set bringing the score to 21-17. Again, the Crusaders managed to beat the Jags making it 2-0.

Set three took a turn after AHN took the lead with Perez serving. TC took the first timeout of the third set with a score 0-5, Academy leading. After one of Opp’s epic kills, the anchors mentioned that the junior has completed ten kills within those three sets and added, after one of TC’s blocks, that it, “was very rare to block Opp’s kills.” The score quickly kept rising after Rosales faked a hit allowing Camille to make another kill making the score 16-21. Bulliet appeared to be hurt after diving for a ball , however she quickly got up and repeatedly informed her coach she was fine, and returned to the court. The Jags ended game three, winning with a score of 17-25.

During a quick interview with Academy’s coach, Curt told the anchors he was hoping the team will pick up the intensity, so they will have the same outcome they had in set three, which ended up happening. Academy took the win for game four after Stanechewski made the final kill making the score 21-24, Academy’s game. This was a big set for Stanechewski, Rosales, and Opp all keeping the score up with memorable kills. During this set, Opp completed her sixteenth kill for the game.

Since both Academy and TC won two games each, the two teams went into a fifth set which would only go to fifteen points. Rosales stated “When TC won the first two games I was angry that we were playing so bad because I know what our full potential was and I didn’t want TC to have the satisfaction of beating us so easily. When we won the next two I was thrilled that the team fought back even though it was much easier to give up and let TC win the third set. I honestly thought we were going to win, I was excited and every point I was jumping up and down trying to give more energy to the team.”  Holy Names was the first to score during this match, leading to the first serve completed by Perez. Similar to sets one through four, the score continued to stay at a maximum of two points apart. The game ended with the score of 16-14, Tampa Catholic winning three out of five games.

The next game for the Jaguars will be against Berkeley on September 29th at home. Make sure to come out and support the Jaguars! Find a complete schedule of the remaining games for the Jaguars volleyball team on the Academy website.