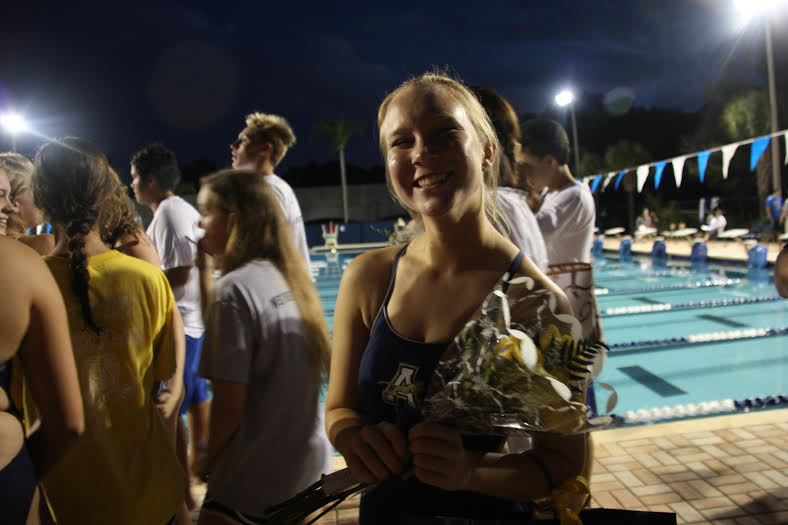 Each year, the Academy Swimming and Diving team hosts its annual Senior Night commemorating the achievements and the everlasting friendships the Seniors of the Academy Swim Team have made. It is a night of gratitude for the Seniors on the team who are graduating that year, to reminisce on the great memories. On Wednesday, September 30, 2015, after four long years, during a swim meet between Tampa Catholic High School, The Tampa Bay Heat, and Jesuit High School the eight swimmers and diver from the class of 2016 finally had their night in the spotlight.

With Seniors on the team since the freshman year, it will be a huge change when they graduate and are finally alums from the team. The Seniors on the Academy Swim team consist of nine people, Camille Yodzis, Rebecca Parrillo, Clarise Ramos, Georgia Flanaghan, Olivia Kirkpatrick, Gabby Verdugo, Alejandra Lozano, Maggie Marquart, and Kendal Lewis. Having been on such a close-knit team, it is almost like they are leaving their second family behind, closing a chapter of their life to start a new one in college.

Yodzis, who has been swimming since 2013, declares, “I honestly cannot believe that the swim season is almost over. It is so crazy to think that I’m almost done”. Parrillo states, “I loved hanging out with everyone on the team. Before joining, I didn’t really know any other people besides the girls in my grade. Being on the team brought me together with girls in the middle school and other grades in the high school. It was fun to suffer together through practices together.”

Seniors on the team that have never been on a competitive swim team state that the sport has changed their life for the better. Verdugo says, “Joining the swim team has impacted my life in a hugely positive way. I’ve made new friends, I’ve been able to participate in something that i’m passionate about, and I’ve been able to push myself past my limits. Being a part of the swim team has instilled values in me that i will always hold on to, and I couldn’t be more thankful for being a part of an amazing team.” Marquart admits, “Without the team freshman year I don’t know what I would have done. They were my first friends in high school and have continued to be people I can always rely on. The team has had the most positive effect on me and really shaped my high school experience for the better.”

Senior Night is not only for graduating swimmers from Academy, but also the swimmers on the other teams that Academy is competing against on that day. The seniors from competing teams receive a rose and/or gifts. Tears were shed when the Seniors from Tampa Catholic High School, The Heat, Jesuit High School, and Academy, ran through the man made tunnel made by the Juniors and underclassmen, formed by everyone on the swim team in two rows facing each other and the swimmers holding a kick board in the air and hitting the person across from them, making a loud clapping sound. Parrillo exclaims, “Besides being worried that I was going to hit my head/back on the boards, it was so surreal. I couldn’t believe what was happening. I still felt like that should’ve been me as part of the tunnel, not running through it. It was like all this time on the team finally led up to this moment”.

The climax of Senior Night is when an Academy Junior and/or an underclassmen read their prepared speeches for one of the Academy Seniors in front of their family, friends, and teammates. It is a time between the Senior and the speaker to reminisce on the memorable moments throughout their friendship.

The class of 2016 is going off to college and leaving all of their life-long friends back at the Academy, leaving some tips on what to expect for upcoming Academy freshmen who plan on joining the swim team.

“Never be late to practice otherwise you’ll have laps upon laps of lunges. But hey you’ll get that summer bod with the help of the lungs”. -Camille Yodzis
“Don’t skip sets, it keeps getting harder and if you don’t try, you won’t improve” – Kendall Lewis
“Enjoy it while it lasts, because soon enough that’s gonna be you running through the arches, crying while listening to your speech. Always try your best, and don’t get hung up over the little things. And don’t forget about your school work.” – Rebecca Parrillo
“Set goals for yourself. Push yourself to be the best you can be, and then some. You won’t regret it”. – Gabby Verdugo
“You’re four years on this team will go by so fast to take advantage of every opportunity, get to know your fellow teammates, and cherish every moment with the team because it will be over before you know it.” – Maggie Marquart

Yodzis hangs up her suit saying, “Leaving the team to the class of 2017 is going to be hard but I have faith in them and I know they can bring home a States trophy!”

No matter what the AHN swimmers pursue in college, whether it be swimming in college or not, the AHN swim team will never forget them!