Jesuit vs. Tampa Catholic from the Cheerleaders’ Sidelines 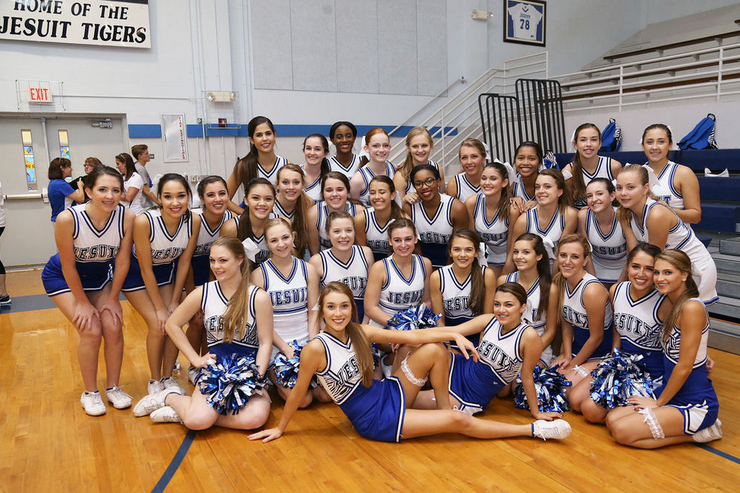 The Varsity Jesuit Cheerleaders experience all kinds of emotions as they take on this Friday's rivalry football game from the sidelines.

The best time of the year for the Jesuit Cheerleaders is almost here. On Friday, November 6, 2015 the Jesuit football team will play against their rival, Tampa Catholic. Each year, the rivalry game causes a week’s worth of hype. Students have repeatedly taken to Twitter to express their school’s dominance, and meanwhile the rest of Tampa’s schools sit back, grab some popcorn, and wait to watch the burn:

However, for the Jesuit Cheerleaders, the week before includes more than just a buildup of excitement through the computer screen. The Cheerleaders start preparing the Monday and Wednesday before the Friday game, with two hour practices devoted solely to working on TC pep rally and game material. Tensions run high for all twenty of the Varsity girls as they hassle to show off their best stunting, tumbling, cheers, and dances within the short time span that they have. Junior Karianne Buser expresses, “cheer is very tiresome and overwhelming the week before the Tampa Catholic game because we have so little time to come up with stunts that will look impressive. Not to mention we have to fix every detail of our old chants and band dances. There’s a very big crowd at the TC game, so it’s important that we look put together.” Buser also notes how  seniorcheer captains Hadley Chillura, Maria Zeno, and Zoe Bennett seem to be the most overwhelmed. The three captains have to make up three new cheers that incorporate a complicated pyramid or stunt sequence.

An example is shown in the video below where flyers Bella Guerra and Maria Zeno excel as they try out a Tick-Tock, a stunt where they quickly switch legs while their bases toss them on their old foot and catch their new foot to keep her in the air. They then proceed to flip backwards into a one legged stunt.

On Friday, November 6th the Academy girls on Jesuit Varsity Cheer will leave school early to kick off the eventful night with a Jesuit in-school pep rally. The Pep Rally makes everyone energetic with funny skits (cough cough dissing TC), powerful drum solos from the Jesuit band, and cheers from Academy’s own. The cheerleaders will later show up to Jesuit’s Alumni Field to watch the Tigers take on the Crusaders; they are confident that their hard work will not go to waste, based on all the speculation of how big this game will be.

With all this hype, however, comes some nerves. In a quick conversation, Junior Ellie Abdoney considers this, exclaiming “I feel like I would be really nervous to cheer because there are so many people there.” However, senior cheerleader Rebecca Castellano admitted in an interview that while she hardly gets nervous before big games, she always get nervous for the Tampa Catholic game. She explained that the pressure to win increases more and more each year due to the buildup from the cheer gym and social media; inherently, there is more pressure for the cheerleaders to be on their A-game.

Tensions will subside on Friday night after the game is over, but for now we can only wish our cheerleaders the best of luck. Go Tigers.