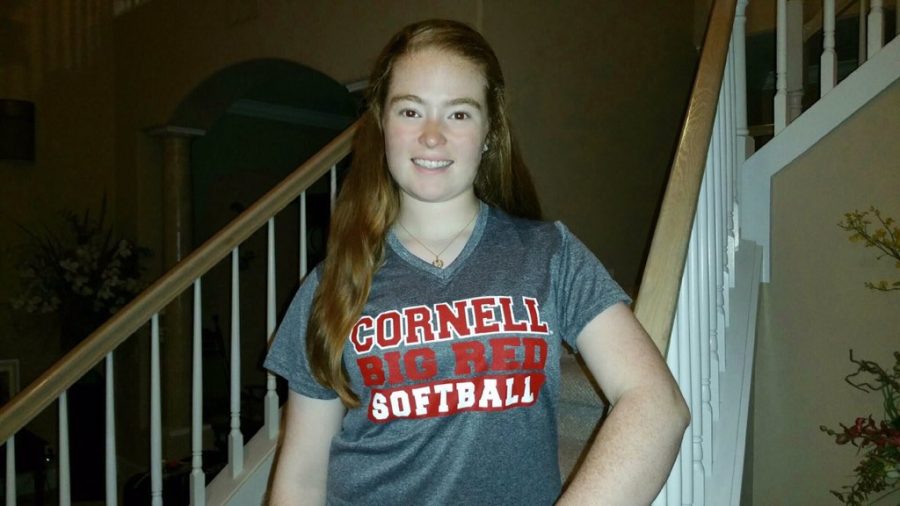 Hale is now often seen sporting Cornell clothing to show her support for her new school.

Katie Hale’s commitment to Cornell was a result of both her athletic talent and academic success. Hale’s hard work and determination has always shown in her play, but on July 20, a scout from Cornell University finally noticed. Hale is continuing to try and improve her game to prepare for her college career.

Hale comments, “Committing was a relief. I wanted to go to a really high academic school and Cornell is both an Ivy League school and a Division I school, so it is the best of both worlds.”

Hale had communicated with coach Julie Farlow earlier in the year by sending videos showcasing her talents on the field. Farlow emailed her back and expressed a lot of interest. She liked her versatility on the field and believed her academics were on par with the school’s standards. Additionally, Hale played in a couple of tournaments that were being recorded by Cornell, and the coach loved her swing and defensive skills on the field.

Academy’s softball coach Don Barron states, “Katie Hale is a four year captain whose ability exemplifies her dedication and leadership on and off the field. Cornell University is getting one of AHN softballs best.”

Hale has been playing softball since the age of five and has played on a total of three travel teams: the Predators, the Mini Bulls, and currently the Firecrackers. She has played for AHN since freshman year, playing multiple positions and assisting her team in anyway she can.

Alyssa LoSauro (‘18) stated, “Katie’s work ethic is phenomenal because she always goes above and beyond to become better on and off the field. She looks out for all of her teammates and motivates all of us to be the best we can be.”

Hale attributes her success to all those who believed in her and supported her on this journey: her coaches, friends, and especially her parents. Her father has coached her most of life and shaped her into the player she is today.

Hale claims, “My dad has always been there with me every step of the way and I would not be where I am today if it was not for all the training that  he put me through to make me a better player.”

Although Hale is already committed, she is continuing to work hard in both her academics and athletics to maintain her good standing with Cornell.