AHN Soccer Storms Into The Postseason 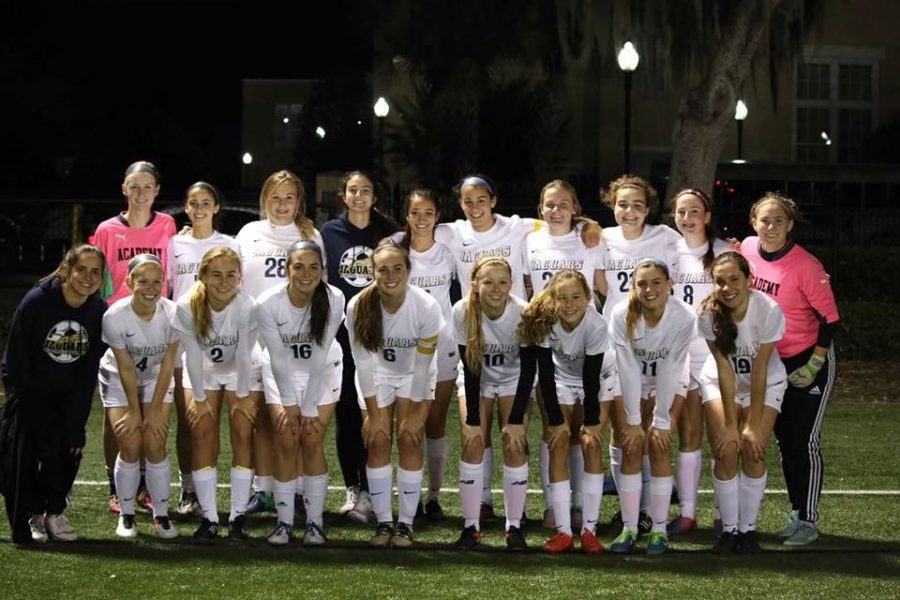 The team prepared for their big district week by having a team meal at coach Kareem Escayg's house on Saturday, January 14.

As of January 11, 2016, the Academy soccer team finished their regular season with a record of 13-2-2. Additionally, the team finished undefeated in district play, earning them the top seed going into the district playoffs which began on Tuesday, January 17 at Clearwater Central Catholic. They look to carry their momentum into the playoffs.

Senior Julia Petrillo, a University of Connecticut commit, says, “We are very happy that we went undefeated in our regular season district games, but we cannot take the teams we will play for granted because we had some close games against them.”

The Jaguars are looking to continue off of their historic season last year. The team won the first ever district and regional championship in AHN soccer history. They also made it to state semifinals for the first time before losing to Bolle’s, the eventual state champion, by a score of 2-1. Although the team lost top scorer Julia Lester this year, they are still considered one of the top teams in the state. Senior Hannah Menendez leads the team with 24 goals and Junior Claire Obeck follows with ten goals.

Junior Hailey Eckermann says, “Going to States last year was an unreal feeling. I really want our team to repeat that so everyone can get to be a part of the amazing experience.”

On Wednesday, January 18, the Jaguars faced Tampa Preparatory School in the district semifinal game. Tampa Prep had previously defeated Tampa Catholic in the district quarterfinals. AHN controlled the game from the start, and won by a score of 8-0. Menendez, Lauren Dingle, and Caroline Lamoreux led the team with two goals each.

On Friday, January 20, AHN will face Berkeley Preparatory School in the district championship, a rematch of the district final of last year. When the two teams met previously this season, AHN won the evenly matched game 2-1. Berkeley defeated the host school, Clearwater Central Catholic, 3-0 to advance to the finals.

“Our first game against Berkeley was very close and competitive. Both teams have very talented players so we will need to be focused on our game plan to be able to win again,” says Senior Hannah Menendez, a University of North Florida commit.

Whether the Jaguars win or lose in the championship, they will advance to a regional quarterfinal game which will be played on Thursday, January 26. Winning the district championship would give them home-field advantage for that game.