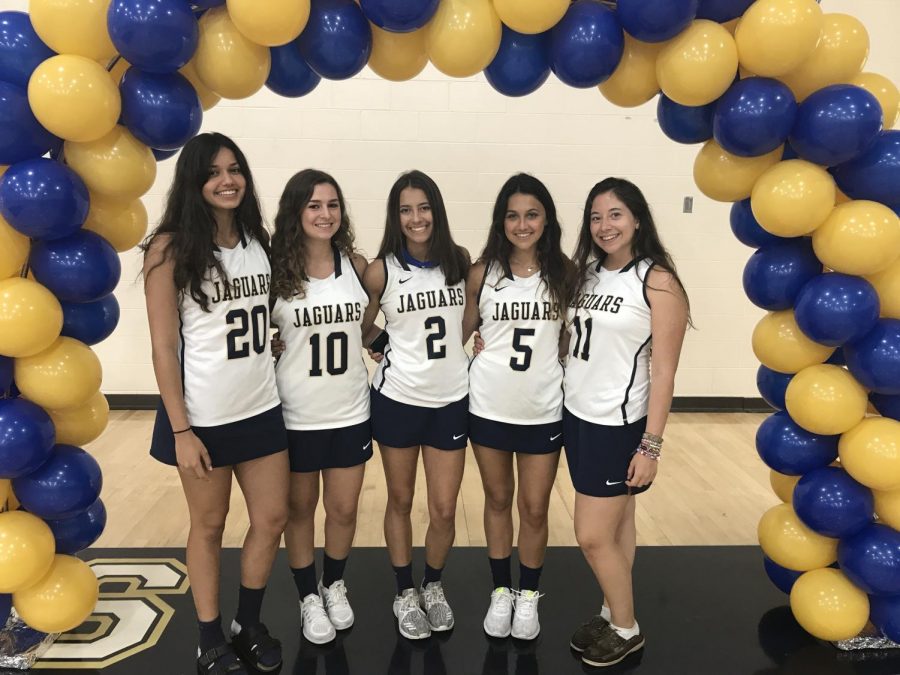 This senior class will be the first group of seniors to have been on the varsity team for 4 years since it is inaugural season. (Photo Credit: Mia Lopez/ Achona Online)

With almost less than a month left of school for the class of 2018, the lacrosse team honored their five seniors at the match up against Bloomingdale High School on April 10, 2018.

Before the senior night ceremony began, the team gathered in the gym team room and the underclassmen read seniors small speeches reminiscing on memories that honored their hard work. The ceremony began as the lacrosse seniors were escorted into the gym by their families as a description of their past four years was projected over the speakers. Each senior agreed that their favorite lacrosse memory was their win against Robinson High School last season which advanced them to playing at districts.

Following this, Dorothy Pickard read a speech that she wrote for the senior class on behalf of the team.

Dorothy Pickard (‘20) says, “I had so much fun writing this speech because I feel very strongly about the seniors and how they have affected me.”

The Jaguars put in all of their effort during their neck-and-neck game against the Bloomingdale Bulls. The Bulls took the win with a score of 13-11, but the team played one of their best games of the season.

Feraby Hoffman (‘18) says, “I think our team played one of our hardest fought games of the season. We worked hard for each goal and made smart decisions. We fought hard until the last seconds despite the score.”

Alexandra Fonseca (‘18) says, “I am going to miss Academy lacrosse because it has consistently been a part of my life for four years. I don’t know what I am going to do without all of my teammates. Senior night really brought all of this to reality when I read those letters.”