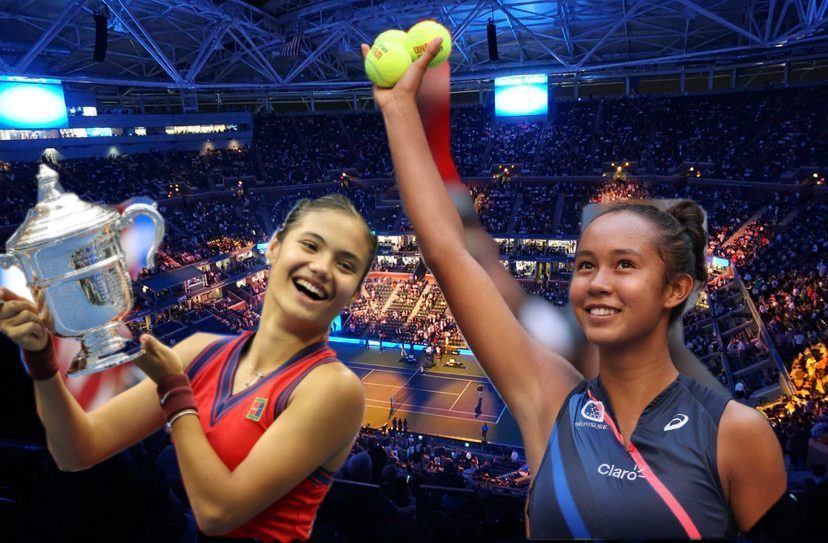 The U.S. Open recently ended in New York as players battled in the finals on Sept. 11 and 12.  On the men’s side, there were some of the regular suspects for players in the final rounds with well-known players such as Novak Djokovic and Daniil Medvedev. However this was not the case in the women’s bracket. The two players battling in the final were both unseeded teenagers which was unexpected.

One of these teenagers was U.S. Open finalist, Leylah Fernandez, a 19 year old from Canada currently ranked #73 in the world. She has beaten several of the expected U.S. Open winners including second seed Aryna Sabalenka and third ranked Naomi Osaka. She describes her performance and experience at the US Open as a surprise, as she came into the tournament unseeded. This means that she was not ranked in the top 32 and was not expected to get past the round of 32. She won tournaments at Monterrey and Acapulco both this year, but  has never performed this well in a Grand Slam event, nor has she even been in the running for a senior Grand Slam title. She has, however, previously played in and won junior Grand Slams.

The champion of the 2021 US Open was 18 year old Emma Raducanu from Great Britain. She is currently ranked #150 in the world. She took out several fan favorites such as Olympic gold medal winner Belinda Bencic and 17th seed Maria Sakkari of Greece. Her performance was especially shocking to the tennis community as she had to qualify to get into the main draw of the tournament by playing three qualifying rounds to get into the main draw. Despite the fact that she is not a top ranked player, her success makes sense as she has told interviewers that her favorite surface to play on is hard courts, which are the courts used  at the US Open.

Tennis fans did not expect to see teenagers were playing in the finals. Math teacher, tennis coach, and avid tennis fan Robert Quinn said, “It was awesome. They were both so mature and professional out there. I watched both their semifinal and final matches and they seemed so confident. I loved seeing players out there the same age as some of our students.” The students were also excited about the two teenagers in the final.

Senior and tennis team member Grace Odmark said, “It was really cool to see people our own age in the U.S. Open final. It was really fun to watch but it was also inspiring because the girls that were playing are so hard-working.”

The final took place on Sept. 11 where Raducanu took the title, defeating Fernandez in straight sets. Raducanu was the first person to ever have to play in qualifying rounds and win the Grand Slam, and she was the first teenager to win a major since Maria Sharapova  in 2004. Raducanu did not only create history with these statistics, but also with the fact that she did not lose a set throughout the entire tournament and qualifying rounds. This is extremely rare in tennis, as it had not been done since 2014.

Raducanu spoke to reporters  after her win in New York, expressing her thanks for the crowd, her fans, and the atmosphere at the US Open. She told an interviewer from CBS News, “Thank you to everyone here in New York. Thank you all for making me feel so at home from my first qualifying match all the way to the final. I loved playing in front of you and you’ve really spurred me on in some very difficult moments.”

From sitting her maths and economics A-levels in Bromley to finding her name lit up across New York.

It is, in every sense, the road less travelled.

“It’s crazy to think that three months ago, I was in an exam hall. Now I’m on the biggest court in the world,” she said pic.twitter.com/QEwE9m4Oon