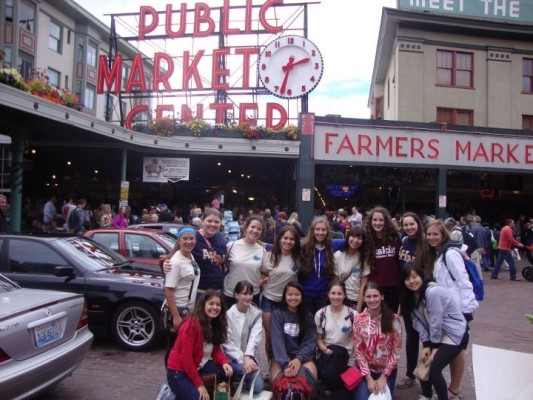 Academt girls stand in from of the famous Pike's Market in Seattle, Washington.

Last July 17, Siobhan Plummer, Allie Reichert, Maddy Babin, Hayley Allmand, and Sister Mary Patricia Plumb SNJM jetted off on a west coast “mission trip” to Seattle. Sister MPP and the four girls set their sights on the SNJM Youth Justice Forum, held at the Holy Names Academy in Seattle. This forum was the second of its kind, hosting four representatives from each Holy Names school across the world, including Los Angeles, Portland, Vancouver, Quebec, Seattle, Tampa, Albany, and Lesotho, Africa.

The Tampites, as the girls were nicknamed, arrived early Tuesday afternoon and helped the Seattle girls set up for all the incoming girls. From Tuesday until the following Monday, the girls learned about social justice, peace, and the workings of the Holy Names sisters across the world.

On Wednesday, the girls were educated about inter-connectedness and the various networks of the Holy Names sisters. They met various Academy sisters across the world with various bonding activities and many laughs. Each day following, the many Academy girls traveled to various service sites in Seattle that coincided with the themes each day. Through service and many other lectures, the participants learned the facts about social justice, as well as how to implement it in their cities back home.

Thursday’s theme was human trafficking, featuring various speakers from the International Peace and Justice Committee. The girls realized the shocking prevalence of this evil, even within our own country and spoke with survivors.

“I cried so hard when Tori told her story,” –Jeanne (Quebec)

On Friday, the participants focused on immigration and the many challenges it brings. The girls heard various speakers and worked in groups, discussing the issue. One service group heard the inspiring story of a man working with them, as he and his family immigrated from Iran few years ago.

Each day came with its emotions, many speakers sparking tears and the trips bringing laughs and forming friendships. The girls were able to learn about social justice and recognize the many evils in today’s world.

Each night, it was incredible to listen as the dinner prayer would be said or sang in four or five different languages, including French, Ukranian, Spanish, English, and Xhosa. It was amazing to feel the incredible cultural differences in the room, yet the bonds of SNJM sisterhood held everyone together in such a special way.

“I feel like we are all so different, but that is what makes us come together in such an awesome way,” said Emily Doe from the Seattle school.

Throughout the week, each group would present a cultural activity, showing off their local culture for everyone. The Lesotho group taught everyone a local tribal dance, with drums, costumes and all. The various other groups brought local foods, played Jeopardy, and made virtual city tours. Although the cultural differences set everyone apart, it also brought everyone together as the girls began to respect and love one another.

Maddy Babin, AHN Tampa, said,  “It was crazy to hear all the different languages. It made me feel like I was traveling the world just by being there.”

On Saturday, after a few days of service sites and social justice talks, the girls learned about the many water issues in society, taking a boat tour at a local port in the Seattle Harbor. The pollution really hit home with the girls, as many of them realized that drinkable water is not as easy as a trip to the sink for many people across the world. On Saturday night, the girls from each city presented an activity surrounding a social justice issue in their local area, and the participants opened their eyes to the various struggles that even their own Academy sisters deal with in their home communities.

Sunday presented many tears and lots of hugs, as the girls prepared for the many trips home. Each group teamed up, planning the implementation of Social Justice groups in their home schools in an effort to bring the knowledge of the week home to everyone. The girls learned much about each other, their cultural differences and similarities and came together as one big SNJM family, crying and singing as loud as possible at their last night prayer together.

Siobhan Plummer commented, “I felt so close to everyone by the end. I didn’t want to leave any of the girls.”

One week brought girls from across the world together under one roof to learn tolerance and educate themselves on the many issues in the world. This one week changed the lives of forty girls, and they will change the lives of those around them as they travel home to spread the word about social justice and the SNJM family.