Class of 2017 Welcomed with Enthusiasm and Noise 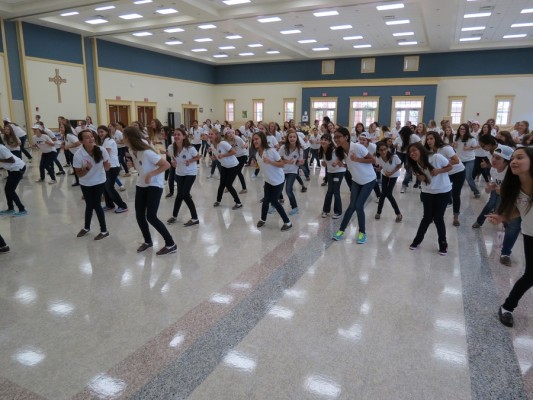 "Knees too-gether!" the class of 2017 shout in their best British accent; a favorite part of "Singing in the Rain".

Loud and louder were the two volumes displayed by the Student Council Members and new students during the Freshman Orientation last Thursday. One hundred and twenty enthusiastic ladies gathered in the Brady Center, ready for their first day as AHN women. The introductory game, Index Card Pairings, allowed the girls to mingle with their new peers.

The Class of 2017 stepped out of their comfort zone as Student Council gals showed them how to do the funky chicken, peel the banana, and sing in the rain. Freshmen chanted all of the traditional orientation songs, hoping to have them memorized for the all-school orientation the following day.

Student Council led the girls through icebreakers such as “Brand Names,” where students went around in a circle saying the name of a brand beginning with the first letter of their name.

“Starburst” Sophia Bahri enjoyed participating in the games and activities within the small groups.

“I liked the Toilet Paper Factoid game because we got to find out facts about other people and know our classmates better.”

The freshmen showed no fear as many participated in the “Stomp the Floor” questions. This activity was meant to answer common questions that a freshman might have about Academy life and allowed them to ask questions of their own.  Following the activity, the girls were given time for reflection as they wrote a letter to their future self about their hopes, dreams, and goals as Academy women.

A tour of the school, provided by the Ambassadors, as well as a chicken sandwich lunch from PDQ gave the young ladies a chance to meet and bond with their new sisters.

Worried faces and shy attitudes had melted away by the end of the afternoon. Girls such as freshman Chloe Paman felt more confident to begin a new chapter in their lives as Academy students. “I was very nervous because I wondered if I would make new friends, but what helped me get over this anxiety was realizing that the people around me were just as shy. Now, I’m ready to take on the year!”