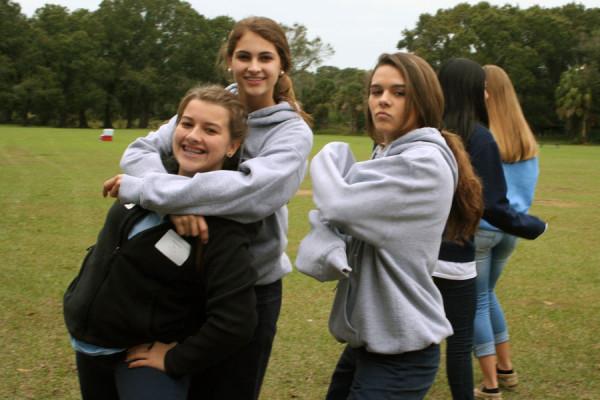 Friday, November 15, the Academy Sophomores took a break from the books to experience a piece of unfamiliar scenery. After all the laughing and talking and playing around on the bus, the sophomore sisters reached their destination, the Sophomore Retreat at Mary Help of Christians, to learn about their faith and to grow closer as sisters.

As soon as they were off the bus and out by the lake, all the girls wandered around the property in amazement. The first thing they noticed was the stunning view; all of the girls were amazed; and there was a sense of a new fire just beginning to burn.

Jenn Amor summed up the scene in two sentences. “The scenery was gorgeous! Even though we were not outside most of the day, it was the perfect temperature and gave a great setting for the retreat.”

The activities started off with Mass in a beautiful church. Father Bruce Craig SDB, Pastor of Mary Help of Christians Parish, was the Celebrant at the Mass. He left the girls with a new sense of direction.

In the homily, Father Bruce brought a serious problem to the table. He spoke about distractions and how while we may seem close to God, those distractions are holding us back from Him. Father Bruce put some examples of the serious distractions we face today on the cross carried to the altar by Miranda Plummer. Objects that represented money, music, sports, clothes, appearance and greed covered the cross until it seemed as if there was no cross, just a bundle of things absorbing people’s minds and attention today. He explained how nothing is more important than having a relationship with God and clearing away those distractions.

After the Mass, the girls were brought into a room and split into groups based on the Disney Princess sticker on their name tag. They all shifted to the open area and were blindfolded. The name of the game was Simon Says and the rules were the same, but, what they didn’t expect was the distractions. After the first round of Simon Says when they were somewhat used to playing with blindfolds on, music began to play. Each round it grew louder and louder until no one could tell what exactly Simon was saying.

Stefanie Tanase enjoyed the game and the impact that it had on her. “I really liked this activity. It really was a great way to prove their point on how we live in such a busy society, we tend to put less important material items in front of the most important ones like our faith and God.”

When the game was finished, the girls went back in their groups to talk about serious questions like “What do you want to do with your life?” and “What are your distractions?”

After lunch, the girls traveled to a small room where they were shown a series of examples on how God guides us. Jazzy Mendoza took on the part as God and helped lead the blindfolded Father Bruce across a floor of large and sharp tacks. The suspense was crazy.

Becca Parrillo exclaimed [that], “When Father Bruce walked across the tacks, I was really nervous and scared that he might step on one of the tacks. He had a few close calls but with the help from Jesus [Jazzy] and of course the help of the screaming audience, he was kept safe and it shows how we should completely trust in God.”

The girls ended the day with a trust walk. Each girl had a partner and they took turns walking blindfolded all the way back to the church.

The blindfolding activities were the favorite of Demilsa Gomez. “At the end of the day I really liked the trust walk and being blindfolded! Through out the day there were different interesting activities that brought [us sophomore]  girls closer together.”