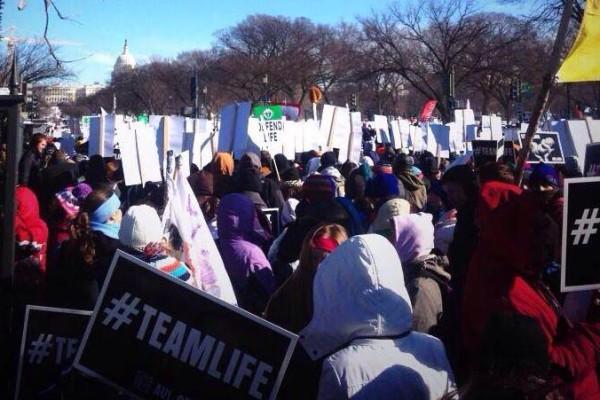 This winter’s weather can definitely be considered wacky, and a group of 30 Academy girls had first hand experience with this craziness during the annual March for Life in Washington DC. On Monday January 20, members of AHN’s Respect for Life Club headed up to the nation’s capital for the pro-life event.

The first two days in DC were spent site-seeing and checking out different pro-life events around the city. Tuesday brought several surprises including several inches of snow. All federal agencies shut down due to the weather conditions, but this didn’t stop the Academy girls. Many of the girls had never seen snow before, and everyone agreed that it was definitely a welcome change from Florida’s humidity. The girls bundled up and made the best of the unexpected situation, braving the unnaturally cold weather with smiling faces.

On the day of the 40th annual March for Life, it reached -5 degrees with the wind chill. However, the group was up and ready at 7AM to start their busy day. After piling on many layers of clothing, the girls made it to the DC Armory for the Youth Rally and Mass for Life. After enjoying lots of singing and a beautiful Mass, the AHN Respect for Life Club joined thousands of others on the National Mall for the march to the steps of the Supreme Court. A little frostbite didn’t stop anyone, and the group proudly marched until the end while carrying an Academy banner. Junior Julia Metzger thought the march was a moving experience. “I got closer with girls who I didn’t know before and we bonded over the cause.”

For the fourth year in a row, the Respect for Life Club’s trip to DC was a great success. President of the club, senior Allie Reichert, couldn’t have been happier with the trip. “I’m so excited that we got so many girls to participate in this year’s march. We all had so much fun and it was amazing to be able to take action and stand up for our beliefs.”