American gun violence: Who is to blame? 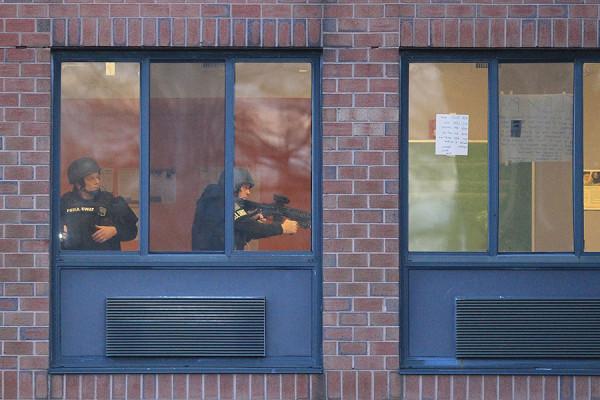 Who can we blame for the drastic increase in school shootings? Is American society becoming too violent? Is it already too violent?

It has been a little more than a year since the tragedy at Sandy Hook elementary school and the number of incidents has only increased. According to Adam Peck’s article “School Shootings Are Happening Every Other Day So Far in 2014”, “[…]in the first 14 school days of the year, there have been at least 7 school shootings.”

If the shootings are to continue for the rest of the year to occur at the same rate as they did in January, there will be over 120 incidents in 2014. American citizens need to exam their culture to find where the problem stems from.

Nicholas Tompson, in his article “America’s Culture of Violence”, believes that our country’s violence comes from a deeper place than a civilian’s ability to buy weapons.

Senior Vallie Joesph, an avid video game player, says that all of the most popular video games involve, “death, shooting, violence, and hell.” She believes that the, “realistic characteristics of games could cause younger children to become violent. In the lists of the top video games of 2013 I would say at least half of them involve guns or killing of some sort.”

According to the 2013 State Gun Laws Scorecard released by the Brady Campaign and the Law center to Prevent Gun Violence, twenty-one states enacted new laws to curb gun violence. The states surpassed congress, which, according to MSNBC, “[…]had a notoriously unproductive year on many fronts. Despite the mass of public support, the National Rifle Association and pro-gun lobbying groups were able to shut down most advances.”

After the Navy Yard shooting, President Obama spoke out against the resignation of the normality of shootings. “Alongside the anguish of these American families, alongside the accumulated outrage we feel, I fear there is a creeping resignation that these tragedies are somehow just the way it is, that this is the new normal,” Obama said in a speech after the shooting. “We can’t accept this. We must insist here, today, that there is nothing normal about innocent men and women being gunned down where they work.”

A majority of school shootings in the past have occurred at either public schools or Universities. At Academy how isolated are we from the issue?

Last month a former police officer shot and killed a man in a local movie theater. While it was not a school shooting, it was still another tally mark on the chart of citizens misusing firearms.

“Guns are inanimate objects with no feeling or thoughts. The problem occurs when the wrong people have guns and the only way to combat this problem is for sane, rational people to own guns in order to protect themselves. There are countless of examples of attempted attacks being deterred by gun owners. This is the reason we have the second amendment and must protect it. Some say that the second amendment is outdated and only referred to the ability for citizens to rise against an oppressive government. In modern days, Americans may not need guns to protect themselves from the government, but they need to protect themselves from criminals that own guns themselves and will continue to own guns if they are banned. Banning guns will only take guns away from regular citizens and leave them defenseless against criminals who will not care about a gun ban because they are already breaking the law.”

As Academy women how can we discourage the rising normality of societal violence?