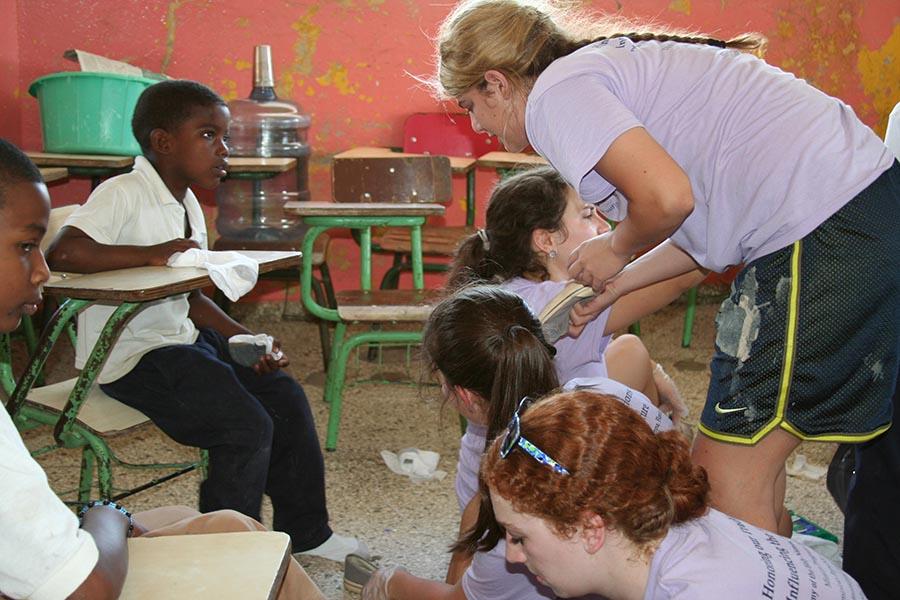 Missionaries fit children for shoes during the DR Trip in 2013

Raising money for mission trips is always a challenge for mission trip leaders, and this year was no exception. There were two events to raise money, Money Wars and A Pajama Tag Day, but they were not equally as successful. Raising money proved an easy task with the pajama day fundraiser and the accompanying breakfast bake sale, Money Wars, however was quite the opposite.

During the pajama tag day, students brought in five dollars, and were allowed to wear their favorite pajamas to school. This fundraiser brought in over two thousand dollars, which was split evenly between all the trips.

However, the annual money wars fundraiser was not nearly as successful. In this fundraiser, grades compete against one another to see who can raise the most money, by putting them into water jugs outside their classrooms. This competition was school wide, but was most successful in the lower school, raising a little over one thousand dollars. The elementary students in particular are very active in this game. In the high school, the freshman took the lead and in the lower school, the first graders were the champions.

Overall, it was not as much of a success in the high school as the mission trip leaders had hoped. Last year, they changed the fundraiser from Penny Wars, to Money Wars, in an attempt to bring in more funds, but the missionaries did not get as great of a response as expected. Senior, Bridget Davis, said she simply, “forgot to donate to money wars because, there is just not enough rivalry and competition between grades.” Missionaries are disappointed by this response, particularly because they offered to throw an ice cream party for the grade who raised the most money.

All the money that is raised has to be divided evenly between the trips, and because there are now six trips, there is not a lot to go around. Each trip ended up with a little over $170 for their mission. The proceeds from the fundraiser are supposed to cover the costs for crucial supplies for the trips. These supplies may include paint, tools, brushes, food, and other items used on the trips.

The mission trip leaders have been brainstorming ways to bring in more money, and this Thursday, February 27th there will be a fundraiser at Your Pie. This fundraiser will benefit Seeds of Hope, a charity established by AHN alumni to help the people of La Victoria in the Dominican Republic.

Please come out and show your support to your AHN missionaries from 5-7pm at Your Pie! If you say Seeds of Hope, they will give money to the charity!