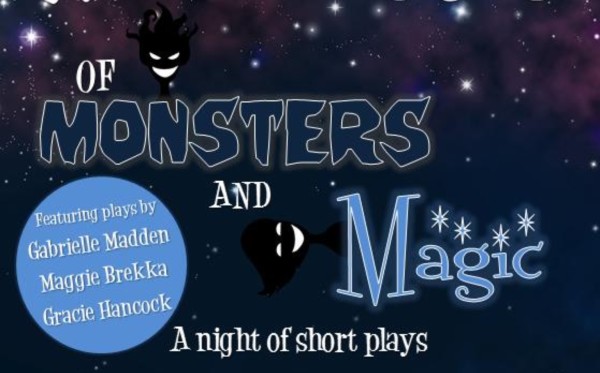 Of Monsters and Magic is coming your way to enchant you with four different plays.

In most schools across the U.S., second semester means easy sailing and setting sights on graduation, spring break, and summer plans. However, for AHN girls, it means the exact opposite. With multiple activities such as Spirit Week, Mini–Course, Mission Trips, and research papers, adding an extracurricular like a full-length play impossible. However, the show must go on, and Troupe 0846 has decided to put up not one, but four small one-acts for the spring production.

The show will include three one-acts written by AHN students and Miss Polly’s Institute Of Criminally Damaged Young Ladies Puts on a Show by Don Zolidis. With the show times running as short as thirty minutes, the pressure of second semester should not be a hazard for the cast members.

Director Ms. Melissa Cox decided that the production should be called “Of Monsters and Magic” because, “When I read through each of the plays, I noticed that there was an element of either magic or monsters (that could be considered imaginary or very real), and so I thought the title should comment on that.”

The three student-written plays include: Saving Grace (by senior Gabrielle Madden), The Mirror in the Attic (by junior Maggie Brekka), and Mom, There’s a Monster in My Room! (by sophomore Gracie Hancock).

Junior Maggie Brekka says having her production put up at Academy, “Is very exciting to have a play that I wrote be performed. I’m very pleased with the cast and [to be] directing it.”

Auditions took place Tuesday January 21, in the Brady Center North with an impressive twenty four girls showing up to audition.  Fortunately, another benefit of having four different shows is that everyone was able to be cast.

Gracie Hancock’s experience on casting was, “[It was] super fun and productive. It was amazing to get the chance to choose who I could see performing what part.”

When it came to inspiration, Gracie notes she did not write this play based on anything in particular, it was, “Something that just occurred, not something inspired by a person or a thing.” She hopes the audience will enjoy the unexpected twist that her story brings.

On the opposite end, Senior Gabrielle Madden wrote her play with a very specific intent, “…[To] reflect on the lives and pasts of several of my friends, and my own. I wanted to show people that the little things they say can affect someone worse than they intended to, and that it is ultimately your choice as to how you take what others say. There is hope and they can get help.”

Maggie Brekka explains that her story’s theme, “Revolves around friendship and time. The two characters are from different time periods but meet through a magic mirror. I think people will be able to relate to the magic and importance of friends.”

Show dates are Thursday, March 6 and Friday, March 7 in Brady Center North. Tickets are $5 for the general public, $3 for AHN students, and concessions will be available. Madden anticipates opening night to be, “Hopefully successful, since it will be four plays and not just one, hopefully people will be more interested.”

There will be no rest for Academy girls, because as soon as the final curtain closes Friday night, some cast members will be packing and preparing for Mini-Course and mission trips; some set to leave as early as Sunday morning.