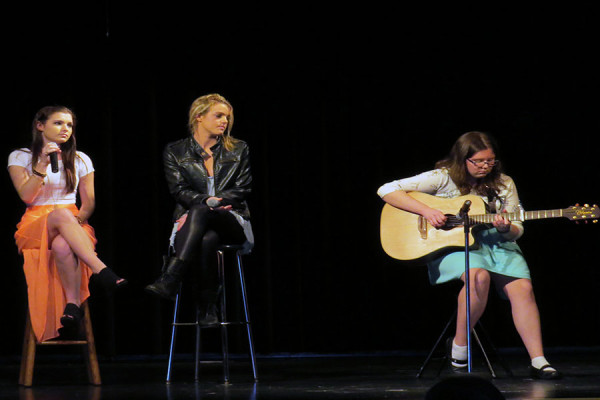 The month of February is famous for the amount of award shows, so it is only fitting for AHN to present their annual talent show, The Academy Awards. Hosted by the Senior Class of 2014, the event took place on Sunday evening, February 9, at 6pm, in the Brady Center. All the proceeds from this event benefit the Senior Endowment Fund.

The talent stretched from musical abilities, to different styles of dancing, to reading a dramatic monologue.

Senior Gaby Mendez kicked off the show with her rendition of The Little Mermaid classic “Part of Your World.” Up next junior Francis Kratz blew the crowd away with her swift Irish dancing. Freshman Sydney Sommer performed her comedic monologue from 30 Reasons To Not Be In A Play by Alan Haehnel.

Senior Nikki Perrella returned to the stage with her famous pink cello, with fellow seniors Vallie Joseph on the drums and Ketaira Philips on vocals, and sophomore Paula Hernandez on guitar. Together they formed the band, The Last Second, and performed the hit song “Radioactive” by Imagine Dragons. The group placed third in the final tally.

Freshman Rachel Tata made her debut at The Academy Awards singing Elton John’s classic “Your Song” (as performed by Ellie Goulding).

During intermission, friends and family were able to contribute money to the jars labeled with the performer’s name to better the chances of that specific act of winning. This money factored into the final tally. The more money received, the greater that act’s chances are of winning.

Courtney Mastrorio performed a beautiful contemporary dance that stole the hearts of the audience.

Juniors Siobhan Lynch, Kayla Rodriguez, and Katelyn Prieboy stole the show with their acoustic version of Katy Perry’s hit pop song “Dark Horse”. As two of the previous winners of the talent show, Rodriguez winning her freshman year and Lynch at last year’s talent show, the two joined forces this year putting their chances of winning to a whole new level. Their lovely harmony wowed the audience and they claimed first place.

Seniors Emily Rodriguez played Barcelona’s “Come Back When You Can” on her ukulele and was accompanied by Gaby Mendez.

Special thanks to juniors of the Jaguarettes dance team for performing, and seniors Emily Rodriguez and Gaby Mendez for their comedic improvisation game of “Pockets” at the end of the show while the final tallies were being reported.

The Senior Class thanks everyone who supported the event and commends all the talented acts for performing. Click here to see the photo gallery of the event.