Graduation arrives for the Class of 2014 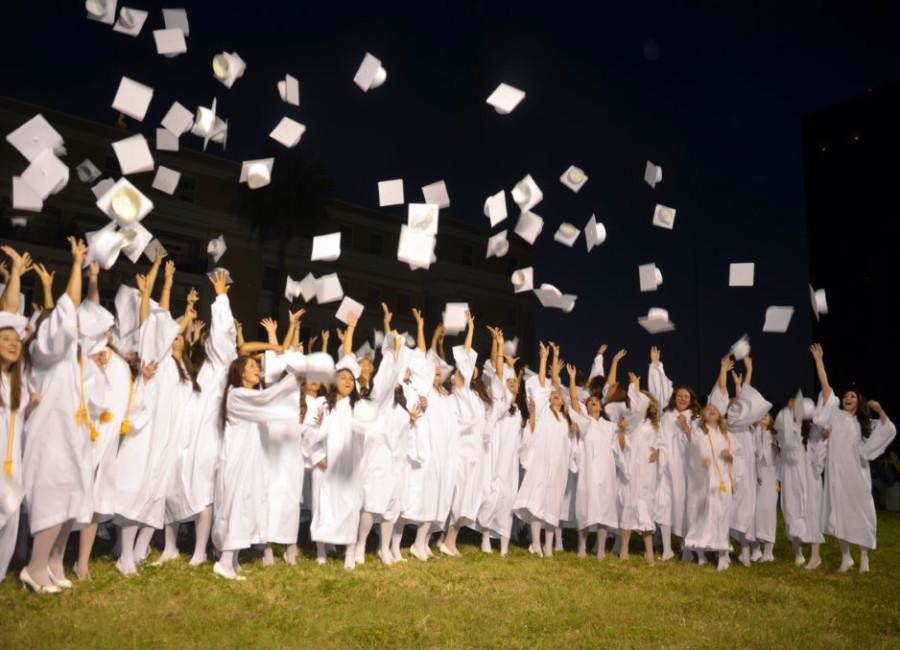 Parents, friends, and other family anxiously waited in the Brady Center; teachers and administration donned their black robes and hoods in the music room. The string quartet was warming up their instruments as the broadcast crew made their final adjustments. The energy and noise of the evening was palpable. The day was Wednesday, May 21, 2014.  The class of 2014 was quietly spending their last moments as seniors praying with Sister Ann Regan in the chapel: The moment had arrived.

After being led by a procession of faculty, the class of 2014 graduation ceremony began with the Invocation, provided by Casey Pluchino and KeTaira Phillips, and the speech of welcome from President Art Raimo.

Salutatorian Elise Heiman took a poignant moment to thank her parents for providing her the opportunity to attend the Academy; a sentiment later reiterated by Valedictorian, Mariah Diaz, as well as the Most Reverend Robert N. Lynch.

Just before announcing the conferring of diplomas, Principal Camille Jowanna announced the honors of the graduating class, including students who earned top honors in core subjects. Once each senior received her diploma and congratulatory red roses from the honorary flower girls, the crowd focused once more to the podium for Diaz’s Valedictorian address.

Using humor and heart, Diaz reflected on the class of 2014’s special bond as a family: “As much as I want to resist the cliché of Academy being a family, it is. Not in the fake, perfect way but in the real way. The “you drive me crazy!”; “why are you doing this to me?”; “we’ve been together way too long!” family. “

Closing remarks by Bishop Lynch also had a touch of humor using a King Henry VIII reference concerning time. Sweetly, he ended with his prayers and hope that the class of 2014 would be able to achieve and receive their hearts’ desire.

Senior Class Vice Presidents Janelle Enriquez and Emily Rodriguez closed the ceremony with the Benediction; soon followed by the graduates’ walk to the Bayshore lawn, cheered on by faculty and staff.

In the stark darkness of the Tampa night sky, 100 bright stars were shining on the front lawn of the Academy of the Holy Names, as newly minted alums, they will only shine brighter as they travel into the distance.