A Look Into Ruskin 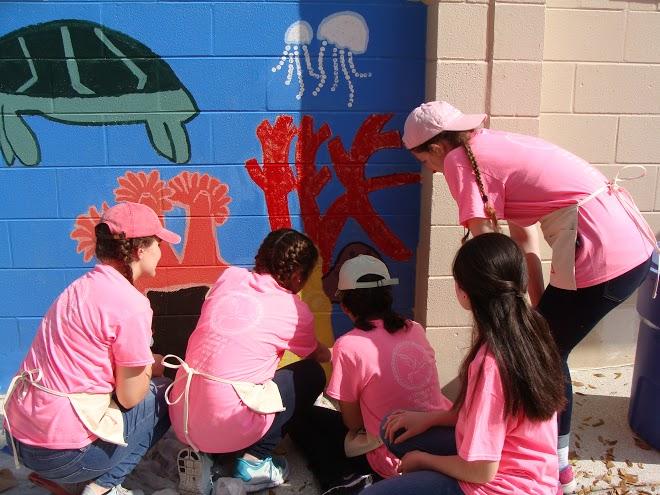 Over the past ten years, Ruskin missionaries have completely altered the look and feel of the RCMA centers all over the area. Credit: Rachel Rosales (used with permission)

For the tenth consecutive year, the Academy of the Holy Names sent twenty four girls to learn about migrant life, and to assist the migrant families in Ruskin, Florida. Ruskin is a city just south of Tampa where many migrant families live and work. These men and women spend an upwards of eight hours growing our local produce. They live in trailers with around four families, which is not exactly what they are made for.  Even after her second trip, junior Carly Fisher is still shocked by the poor living condition the migrant families live and how close it is to home.

Typically when a season is not doing well or ends, the migrants pack up whatever they can in a car, and head to the next state. Unfortunately, since these cars can not hold all of their belongings, they tend to leave a majority of their things behind. In most cases, while they are farming, parents send their children to different local public schools as well as RCMA centers, which are the mission trip’s main focus of work.

The RCMA centers are nonprofit early childhood care centers for the young children of migrant workers. These centers are an alternative for parents so they do not have to bring their children to work on the farms in difficult conditions. There are a total of 71 centers that care for over 7,500 children as of 2012. This year, the young women who attended Ruskin worked in several of the centers located in Palmetto, Wimauma, and Ruskin.

Typically, the missionaries worked with children between the ages of six months to five years old. Many of the children either do not speak English, or struggle with it because Spanish was their first language. While in the RCMA centers, the children are instructed to call their teachers “Teacher” rather than Mrs., Ms., or Mr. Because of this, the girls were quickly stripped of their names and were known as “Teacher” for the full five days.

Each day called for a new activity with the children. When the missionaries weren’t playing games and reading stories to the children, they painted beautiful murals on the walls of several centers.

Freshman Lauren Dingle shares,  “There are so many memories to choose from, but one of my favorites was seeing the kids wake up from their nap to see the mural we had just painted of kids flying kites. They were so excited, and that made all of our work and planning very rewarding!”

During the evenings, missionaries would sort donations ranging from school supplies to clothing. The donations were to be equally distributed and counted, and each item was documented. Following the sorting, the girls would return to the cabin to cook dinner, bond, and prepare for prayer service. For dinner, the girls prepared meals including tacos, chicken nuggets, and pizza. During the bonding time, missionaries shared endless amounts of laughs, showing off their competitive sides in a game of Spoons or simply sitting around together and conversing.

From bonding with each other and children to painting murals on the walls, the girls experienced a time of change, happiness, and phenomenal service.

Junior Carly Fisher exclaims that one of her favorite parts of the trip was, “Seeing how happy the kids are to see us each year. All the kids are filled with joy, despite their conditions, and that is something that I think makes the trip so great.”

Coming into this mission trip, it is clear there will be times of challenge and times of accomplishment along with times of tears and times of endless laughter. Freshman Lauren Dingle shares she once attended a mission trip in Guatemala, but she got to try many new things while on Ruskin.

She compares it to her trip to Guatemala, adding,  “The joy that comes with serving others was just as strong, if not stronger for me on this trip! You can’t help but be happy when you’re surrounded by such sweet kids who are always smiling even though their circumstances”

At the end of the week, when the girls look back, they are able to realize something so beautiful. It is easy to assume there will be some impact on the group being helped, but in reality it’s the group that impacted the girls.