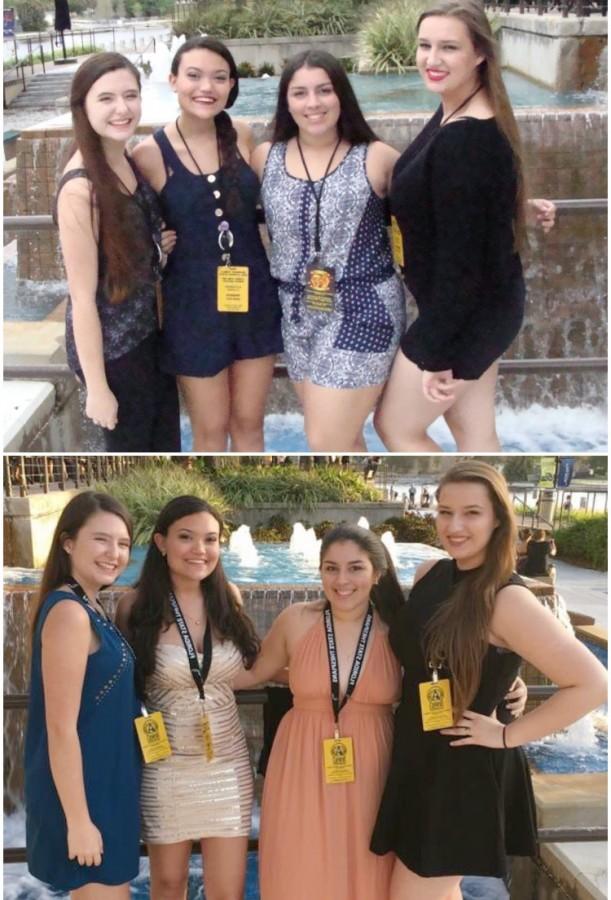 Troupe 0846 Seniors pose at the same location they did four years ago!

Each year, drama enthusiasts across the state of Florida showcase their talent in the arts at the Thespian district competition. Students practice for several months in order to earn a “superior” at districts, which will qualify them to later compete at a State level. The following spring, thousands of Thespians travel to the Tampa area in order to present their individual event once again and qualify for the National competition.

Academy’s Troupe 0846 participated at the District 9 Competition back in October. Talia Sharrieff, Marie Delacruz and myself, Alejandra Lozano, earned a rating of “superior” in our monologues, which allow us to compete at the State Festival. Also, for the first time in Academy history, I earned a “critic’s choice,” which means that the judges chose me as the best in the district for that category.

This year, it was quite the coincidence that the theme of the festival was “The Final Frontier” since it was also my last time attending States. While I was enjoying the festival, bonding with my sisters and rehearsing, I was very melancholic because it was the last time I would ever experience this.

Aside from competing, there are several workshops with guest Broadway artists, opportunities to watch IE’s and One Acts from students all across the state, and networking with thousands of theatre geeks!

Workshop from AchonaOnline on Vimeo.

Marie Delacruz earned a “Superior” but was disqualified for running over time.

Additionally, throughout the week, sophomore Talia Sharrieff created an alter-ego named “Talia Fierce,” and pretended to be a Youtuber. She spent the entire week recording “vlogs” which are simply too hilarious not to share. These videos perfectly demonstrate  what the sisterhood is like and how much fun States really is. I personally cannot wait for next year so I can see more of Talia Fierce.

As sophomore Evelyn Martinez describes it, “Thespians are one big family. Everyone is as passionate as you are about theatre and we all just want to have fun and get to know each other.”

It was an honor and privilege to have spent the past four years doing something that I love with people that I love. I am so thankful for the opportunity to grow as a person and actress. Theatre is one of the most important aspects of my life because it has taught me about others as well as myself. I will always be a Florida State Thespian and I will always proudly represent Troupe 0846.

To future Academy thespians: Compete. I know it may sound intimidating, but you will have the time of your life. Don’t miss out on an opportunity to share your talents with people who love the same things you do! I am so proud that I was able to establish my legacy at Academy, and I hope you can find yours!

View my stories of the past years at States: