Relay For Life Returns to Tampa 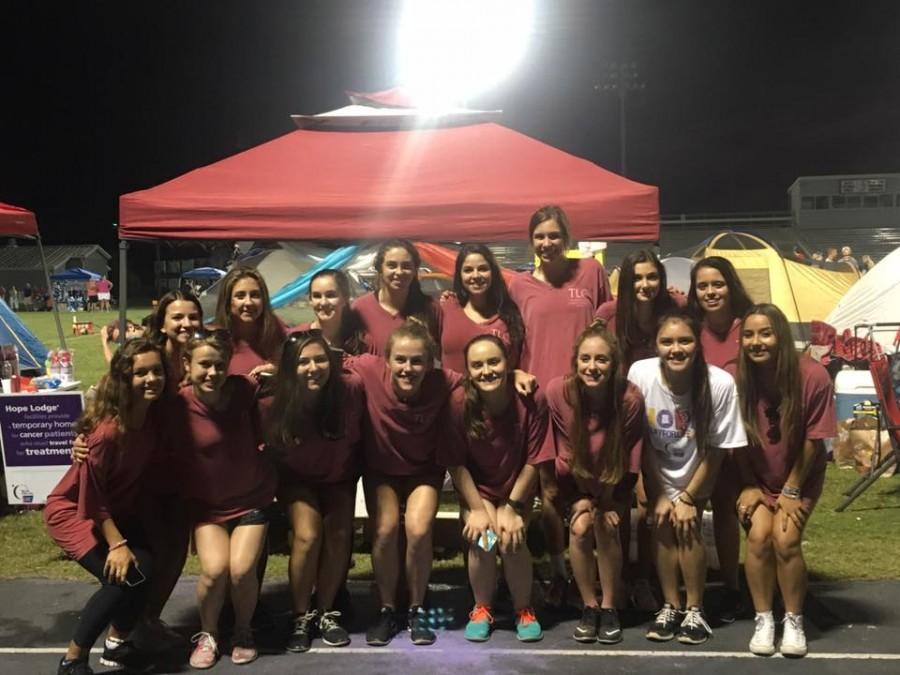 Christina Thompson, senior and president of the TLC, reveals, “Relay for Life is a special night where we can raise money and awareness for all types of cancer. It’s special to me because so many people in my life have been through some battle of cancer. It’s hard to battle, and we need to appreciate all lives who have had to endure it!”

On April first through second, Academy student’s in Teen Leadership Council spent the evening at Robinson High School participating in the annual Relay for Life. The Teen Leadership Council began attending Relay when the club first started, and members have been attending the event ever since. Starting last year, the Academy’s senior Class of 2016 joined TLC in honor of classmate Sydney Wynne.

Typically, each team participating in Relay for Life sets a goal of how much money they intend to raise. This year, overall, a total of $92,336.19 was donated. Students from the Academy made up the majority contribution to that total. TLC donated $5,627.50  and the Class of 2016 raised $1,998.17. Student Council also hosted a Cake Walk, where all of the proceeds were donated to Relay for Life. All of the money raised throughout Relay for Life is donated to the American Cancer Society to assist in continuing to find a cure for such a horrific disease.

At the beginning of the race, survivors take a moment to walk the first lap of the night. Attendees are able to see these strong men and women who have conquered the most difficult of obstacles. Following these heros, are the caregivers who spent time with patients to help them fight. After both groups walk a lap, attendees are invited to start walking laps with the incredible survivors and caregivers.

Over the course of twelve hours, students and adults from different schools and organizations participate in the event by alternating walking laps around the field and participating in games. Each year there is a theme for the event, this year’s, the Olympics. Each table set up was a different country that participates in the Olympic Games. TLC members decided their table would be themed after India. Activities at their table included henna tattoos done by senior Hadley Chillura, as well as colored powder, typically used at Color Runs.

Throughout the night, relay goers were able to visit other tables to play games and hang out with friends from other schools.

Thompson exclaims her favorite part was, “Listening to Julia Gomez’s story of her father’s battle and the song she wrote for him. Even though Julia goes to Plant, I know her through mutual friends. It was cool to listen to her open her heart and show how cancer affected her. She did a great job!”

Tents fill the field where, if attendees became exhausted, can sleep, however, most of the time, everyone stays awake for the full twelve hours. Towards the end of the evening, everything becomes quiet and everyone gathers around to have a moment of silence for all who have lost their lives to cancer. During this moment, luminarias surrounding the field are lit to commemorate loved ones. TLC member and sophomore Courtney Lasman reflects that her favorite part of Relay were the luminarias that were lined up on the bleachers to spell “Hope”.

For Academy students, going to Relay for Life is much more than supporting a wonderful cause. The purpose for this event holds close to students hearts after losing a beloved student to cancer. Spending some time at the event gives them an opportunity to celebrate the beautiful life their sister had. By attending and donating to Relay for Life, they are not only fighting for an overall cure, but they are fighting for their Christmas Angel.

Lasman believes, “People should participate in Relay for Life due to the importance in being apart in the fight against Cancer. It’s also an extremely fun even and bonds a community together. It is so much fun to support finding a cure with the help of your friends.”
As the Relay for Life season comes to an end, there are only a few remaining events to attend. Events will begin opening back up around the end of this year. If you are interested in attending an event, click here to find an event near you.