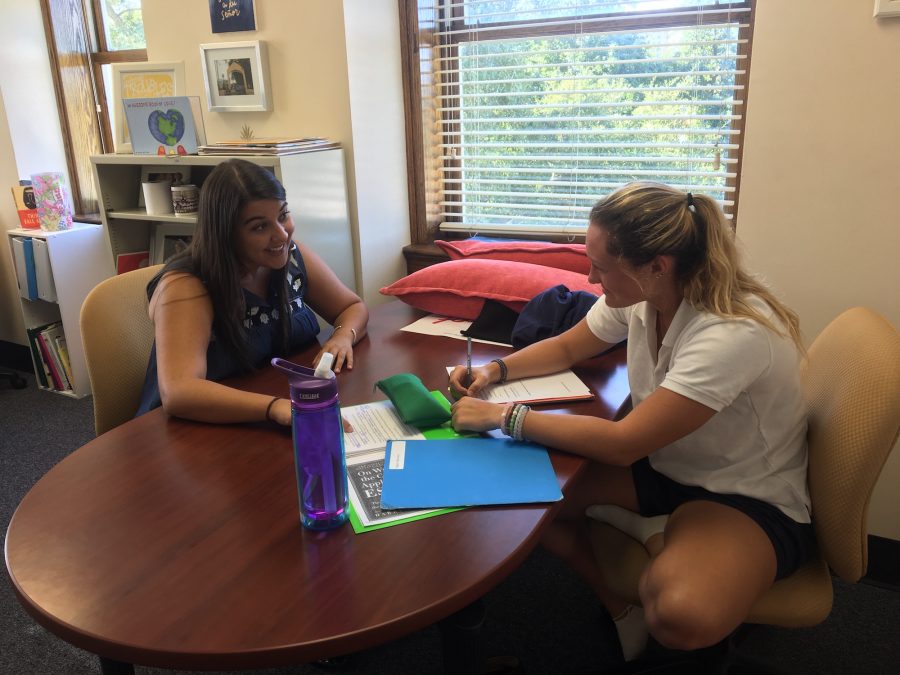 Every new school year welcomes new faces around Academy. This year, along with all of our new students, eight new teachers have joined our community. Nearly every department has added a newbie to its ranks. Here are the new teachers that will be seen around campus this year:

Math teacher David Bland (or Mr. B as he prefers to be called) joins the Math Department this year, teaching Statistics and Geometry. Last year, he taught at Alonso High School, only ten miles down the road, and has been teaching for 12 years. He loves the atmosphere that Academy has to offer, along with many other aspects of the school. Bland became a teacher because he felt drawn to it, as both his grandparents are as well.

Math teacher Jessica Lamm joins the staff this year coming from Plant High School teaching Geometry and Precalculus. She became a teacher because she loved her math teachers in high school and has been teaching for five years. Her favorite part about Academy is the math department because she spends most her time in the office.

Fun Fact: When given the choice to be any food, Lamm chose to be Jif Smooth Peanut Butter.

English and Foreign Language teacher Paige Mangan comes to Academy again after graduating in 2012 and growing up in Tampa. She has always wanted to be a teacher since the 5th grade and loves Academy, because of the legacy that comes with the school. According to Learning Specialist Danica Rodriguez, Mangan is a “sincerely thoughtful and kind person.” This year, she takes on the load of teaching Stepping into a Virtual World, English I, Spanish I, and Yearbook.

Fun Fact: The coolest place Mangan has traveled is to the Swiss Alps, which was also the first time she saw snow.

Learning Specialist Olivia Martinez joins us on her first year of teaching, taking on English I as well. Although she was born in Seattle, Martinez grew up in Tampa. She got into teaching by volunteering at a school during her undergraduate years in college. There are many aspects of Academy that she holds close to her heart, but her favorite is the tradition it upholds from many years ago.

Fun Fact: If she could be any food, Martinez chose to be pizza because she is cheesy.

Personal Guidance Counselor Emily Pantelis comes back to Academy after graduating in 2007 and teaching third grade  at Trinity School for Children. Pantelis had always wanted to be in education, following in her mom’s footsteps, and found the perfect fit in Guidance Counseling, combining her love for education with her passion for mental health counseling. Throughout her many experiences at Academy, Pantelis describes the school as her home because everyone in this community she considers family.

Fun Fact: Pantelis took a three week road trip up the east coast of America, from Tampa to Maine, visiting friends and family members, attending concerts, and several of American historical sights, due to her love of United States History.

Theology teacher Kim Wiley moves up to high school this year, after teaching in middle school here at Academy. She has been teaching on and off since 1986, taking some time off to be a mom. Since Wiley was four years old, she had always wanted to be a teacher. From being a part of this community at Academy for so long, she loves many things about Academy but her favorite is being able to pray and talk about religion openly.

Fun Fact: If Wiley had to pick one food to live on for the rest of her life, she would choose Chips and Queso.

Instrumental Ensemble teacher Yohance Wicks joins us this year in his 12th year of teaching. Growing up in Orlando, Wicks had an immediate love for music because of his teachers who taught him how to “remain honest, motivated, sharp, and true to my own sense of integrity.” He became a teacher to repay his debt to these teachers he owed so much to. Within Wicks first week here, he has loved the respect and intelligence level that each student here shows in his class.

Technical Theatre and Design teacher Paul McColgan has been in the teaching world since he was 14 years old, working on Staff at Boy Scout Summer Camp. His love for teaching shined as he started, finding his passion to help educate very early. Through his short experience at Academy so far, he has loved the technology used to educate and inspire the students here. Both Wicks and McColgan are both also assisting Fine Arts teacher Vivian Kimbler with the spring musical, Footloose.

Fun Fact: When given one word to describe himself, McColgan mixed it up and created the word guywhostrugglestodescribehimselfinoneword.