Carnaval Season Comes to an End 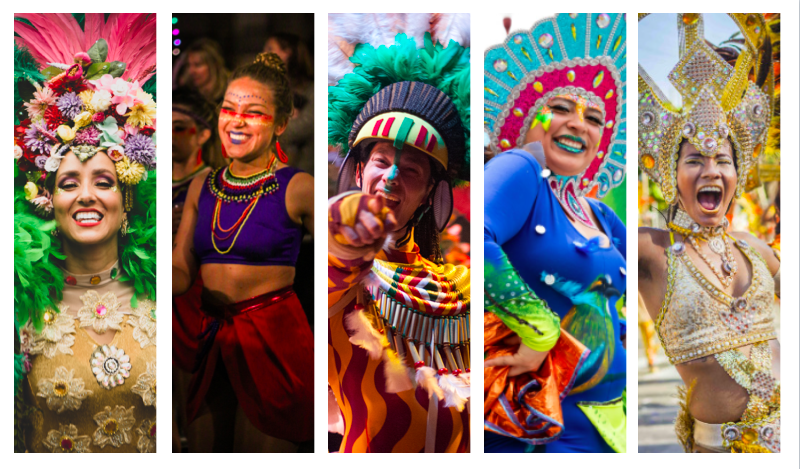 Carnavales are a huge part of Hispanic culture because they represent a mix of tradition, indigenous heritage, and symbolism.

Tuesday, Feb. 25, was the annual day of indulgence before Ash Wednesday. This day, called Fat Tuesday or Mardi Gras, is typically a day or celebration that signifies the preparation that many Catholics undergo before beginning the sacrifices of the Lenten season. However, in Latin American countries, the celebrations can last several weeks.

“I love celebrating Fat Tuesday with my family. My mom always buys a king cake with the little baby figurine in it to prepare us for Lent. I think it’s super cool to see how other cultures celebrate Mardi Gras with their own traditions,” said Maddie Glaum (’21).

Carnaval is in full swing! In some Mexican cities, such as Mazatlán, which hosts the world's third largest Carnaval celebration, festivities resemble New Orleans's Mardi Gras, with a masquerade, parties and parades. Here at home we celebrate with Mi Cocina and Mambos. pic.twitter.com/7AhrVCgvxN

These celebrations, called carnavales in Spanish, occur in many places throughout Latin America. Carnavales are always characterized as a noisy, loud, festive celebration of music, dance, and indulgence before the beginning of Lent. Each country celebrates carnaval in a different way, but each carnaval embodies the same spirit of festivity and celebration.

The most popular carnaval is the Barranquilla Carnaval that occurs every year in Colombia. It’s the biggest celebration of folklore in Colombia and a symbolic representation of Colombian culture. Hispanic rhythms such as cumbia, porro, gaita, and puya are present at the festival. Party goers dance and douse each other with foam. The festival runs for four days, and it includes colorful street parties, decorative costumes, and traditional music.

In 2003, UNESCO declared the Baranquilla Carnival a Masterpiece of Humanity’s Intangible and Oral Heritage; later, the carnival was proclaimed a Cultural Masterpiece by the Colombian government. The popular slogan associated with the festival is “Quien lo vive es quien lo goza (He who lives it, enjoys it).

“I’ve been to the carnival in Colombia and it’s such a happy and beautiful event for every Colombian. The mix of dance, music, and food make it so fun and distinct from any other carnival,” said Sahar Bueno-Abdala (‘21).

Another popular carnaval is the Carnaval de Oruro, which occurs in Oruro, Bolivia. During the festival, Bolivian and Andean indigenous traditions are celebrated. The dances and performances focus on the battle between good and evil, which are central motifs of the folklore traditions of this region. Typically, Bolivians hold their carnaval the Saturday before Ash Wednesday. The festival is expected to last 20 hours and is a spectacular display of tradition and culture.

In Mexico, the Carnival festivities begin on the Friday before Ash Wednesday and culminate on the Tuesday before Ash Wednesday. Mexicans do not have one particular celebration, but rather celebrate carnaval with various festivals around the country. The biggest carnaval celebrations occur in the port cities of Veracruz and Mazatlán. Though the festivals vary from region to region, they typically begin with the “Quema del Mal Humor,” or Burning of Bad Mood, which is typically an effigy that is burnt to symbolize the abandonment of bad energy.

“I have been to a couple carnivals, and it’s a lot of fun. You see a lot of people come out from different communities and unite. Everyone’s friendly, there is lots of color, and there is music that you don’t typically hear in the streets,” said Laura Figueroa (‘21).

Another popular carnaval celebration occurs in the city of Santa Cruz, Spain. This festival, called the Carnaval de Tenerife, is similar to the other festivals but with a particular focus on pageantry. The first, most important event that occurs at the start of the carnaval is the crowning of the Queen of Carnival. The carnival is concluded with the Entierro de la Sardina, or Burial of the Sardine, where a thirty-foot paper mache fish is taken through the streets and buried. The burial represents the end of the hunting season, which is significant for Catholics who give up meat for lent.

Lastly, one of the most well-known carnivales is the one that occurs in the Dominican Republic. Similarly to Mexico, the Dominican Republic’s festivities do not occur in one place but all over the island. Every Sunday in February, the streets of Santo Domingo, Puerto Plata, and Santiago fill up to celebrate. The most notable feature is that groups of people will dress up as Diablos Cojuelos in masks that represent the devil, to symbolize the temptation associated with the Lenten season.

“It’s all of our cultures mixed, and it’s really beautiful. I think it’s an experience everyone should see,” said Figueroa.

Carnaval is embraced in almost every Latin American country; it represents the fusion of unique local cultures with the Catholic traditions of the original colonizers. Overall, the tradition represents a diverse blend of cultures and history. Carnaval is a way for the people of Latin America, often bogged down by the negative realities of their countries, to escape and celebrate together.

“Carnivals are a huge part of our culture and give us a way to celebrate our history with pride,” said Bueno-Abdala (‘21).