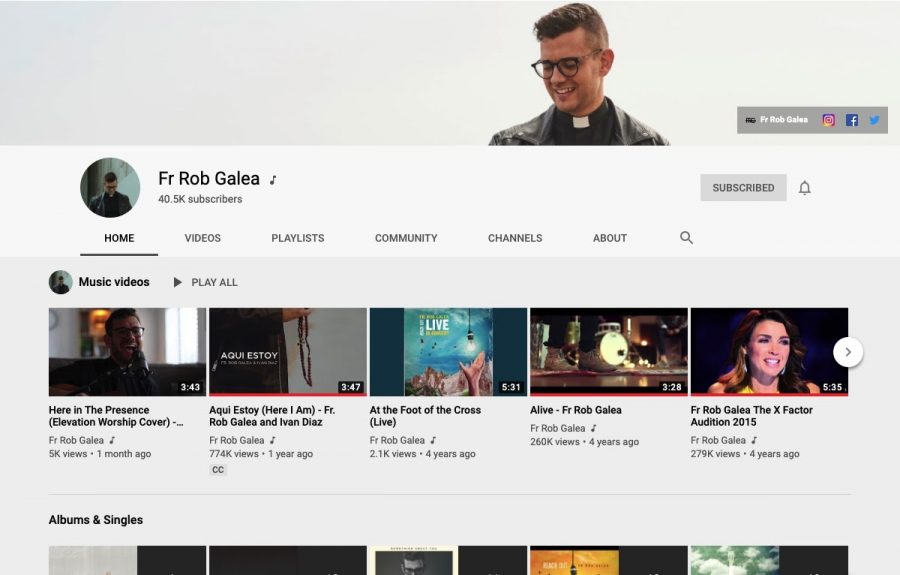 Caption: Fr. Rob Galea is impacting many around the world, including some of the students and teachers at the Academy of the Holy Names.

Fr. Rob Galea is a world-famous singer/songwriter that is known for his beautiful voice and enthusiasm. Above all, though, he wants to be known as a priest, not a musician. His music always goes after his priesthood. Recently, some of the students and teachers at the Academy of the Holy Names have been listening to Fr. Rob Galea’s music. Part of Fr. Rob’s mission is to help teens know and love Jesus. He does that primarily through writing music that younger people enjoy. His website states, “Fr Rob’s passion is to draw others to the heart of God. He believes that music and film are an important instrument in helping people understand the need for intimacy with God.”

I can not wait to welcome our parishioners back into our church. It may be for personal devotional prayer or small groups at Mass; whichever…. I can not wait!

Fr. Rob was born and raised in a Catholic family in Malta. When he was 13, he started hanging out with the wrong people and dealt with violence and addiction.  He was suicidal at 16. At 17, he had an encounter with Jesus that changed his life. He wanted to help others to know and love Jesus too, and felt the call to become a priest.

This is how I fight my battles. #prayer #jesus

“I haven’t watched many videos of his, but I watched the introduction to his YouTube channel and I loved his story. I love how he completely turned his life around and now inspires people everywhere to do the same,” said sophomore Bethany Masiello.

He moved to Australia when he was a seminarian and was on the Australian X-Factor. He received “yes” from all four judges, however, Galea decided to step away during the boot camp phase of the competition in order to honor his previous commitments.  Since his appearance on the show, he has been traveling all over the world to sing and give speeches.

“Listening to Fr. Rob Galea’s music is so special. The way he prays through his lyrics has allowed to create a deeper connection in prayer, really allowing me to open up my heart to God especially through these hard times,” said senior Sofia Tweed.

One important thing about Fr. Rob is that he does not want to be remembered from it as a musician. He wants to be known as a priest first. “I don’t want to be famous . . . I want to make Jesus famous,” Fr. Rob said when interviewed by Salt and Light media.

Campus Minister Katie Holland said, “I only recently heard of Fr. Rob Galea, but when I first watched his live streamed mass I felt so connected and involved.  It was a joy to be able to participate in his mass. Even though he was all the way over in Australia, and my family was here in Tampa, I seriously felt the power of his prayer as if it was coming straight from his hands through my TV set directly to my soul. Yes, I am serious. It was that special!”

Fr. Rob has also written a book about his experiences, “Breakthrough”. He also creates “teaching videos” on his Youtube account along with his music videos. In his teaching videos, he explains different Catholic concepts and misconceptions.

“Fr. Rob’s ministry and music’s message has touched me, and I’ve shared some of the videos with my students. He’s dynamic,” said religion teacher Jaime Meyer.

For more information about Fr. Rob Galea’s music and ministry, visit his website.