Resource Guide to the Catholic Church’s Stance Against Racism 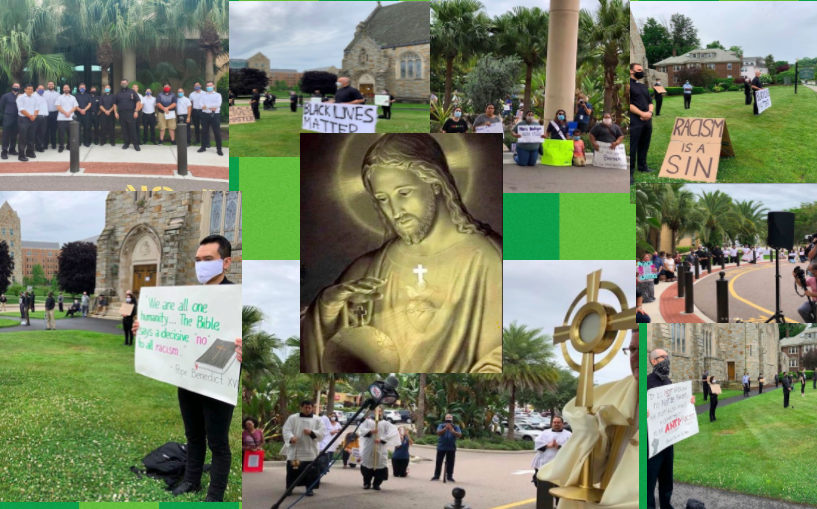 Catholics have been peacefully protesting around the United States. On Sunday, June 7, Bishop Gregory Parkes hosted a holy hour of adoration for the end of racism and violence at the Cathedral of St. Jude in St. Petersburg.

The Catholic Church stands against racism in all forms. The following resources constitute a starting place for understanding the position of the Catholic Church in opposing racism and discrimination while promoting the sancity of every human life.

Statement of the Sisters of the Holy Names, US – Ontario Province

“We can hardly find words to express our horror at witnessing George Floyd beg for air as a Minneapolis policeman restrained him by kneeling on his neck until he died. As Sisters of the Holy Names of Jesus and Mary of the U.S.-Ontario Province, we join with those who condemn this outrageous act against a restrained and helpless black man. We stand with those who advocate for the dignity and respect of every human life. We strongly reject the racism and hatred reflected in this action. While we support peaceful protests against rampant racism, we condemn the destruction of property and the harming of persons involved. We call on our president and all leaders to exert moral influence by promoting peaceful means to deter the violence happening in so many cities. We grieve with and for the families, friends and black communities that have endured so many traumatic killings and for whom George Floyd, Ahmaud Arbery and Breonna Taylor’s deaths are yet another harsh reminder of repeated injustice. We pray for urgently needed reforms in our society and our hearts, so that we may learn to live Jesus’ message to ‘love one another.’” (Statement of the Sisters of the Holy Names, US – Ontario Province)

“Open Wide Our Hearts” and the Eradication of Cultural Discrimination 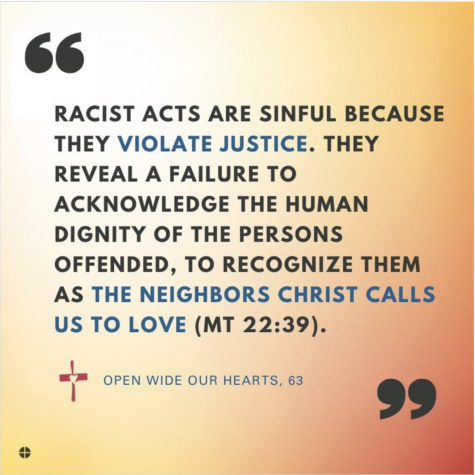 Racism is a sin

Brothers and Sisters to Us, U.S. Catholic Bishops Pastoral Letter on Racism, 1979.

Bishop Gregory Parkes’ “Statement on the Death of George Floyd and Subsequent Protests.”

Franciscan Friars of the Renewal, Fr. Mark-Mary and Fr. Pierre Toussaint hosted a presentation on Ascension Presents about racism and division in the Church.

In his one-minute series, Fr. Rob Galea talks about “Black Lives Matter vs All Lives Matter”.

The Chicago Inquisition, a group of friends who have discussed a variety of Catholic issues since the start of the coronavirus pandemic, addressed racism in their “Episode 8: George Floyd, Race Relations, & the Catholic Perspective.” This group, started by Mary Kate Knorr, a Catholic pro-life activist, livestreams their conversations on YouTube and later turns it into a podcast.

The Call to Love One Another

A Call to the Unity of All the Races

“When the time for Pentecost was fulfilled, they were all in one place together. And suddenly there came from the sky a noise like a strong driving wind, and it filled the entire house in which they were. Then there appeared to them tongues as of fire, which parted and came to rest on each one of them. And they were all filled with the holy Spirit and began to speak in different tongues, as the Spirit enabled them to proclaim. Now there were devout Jews from every nation under heaven staying in Jerusalem. At this sound, they gathered in a large crowd, but they were confused because each one heard them speaking in his own language. They were astounded, and in amazement they asked, “Are not all these people who are speaking Galileans? Then how does each of us hear them in his own native language? We are Parthians, Medes, and Elamites, inhabitants of Mesopotamia, Judea and Cappadocia, Pontus and Asia, Phrygia and Pamphylia, Egypt and the districts of Libya near Cyrene, as well as travelers from Rome, both Jews and converts to Judaism, Cretans and Arabs, yet we hear them speaking in our own tongues of the mighty acts of God.” -Acts 2:1-11

How Catholics Can Lead the Fight Against Racism

Olga Segura, in America magazine, dives into the Catholic Church’s response to the deaths of George Floyd and Breonna Taylor, as well as steps that the Church could take to more passionately counter the sin of racism. Segura’s article “How can Catholics help lead the fight against racism?” explains why racism is a sin and steps to take as Catholics to become more loving of all our brothers and sisters on Earth.