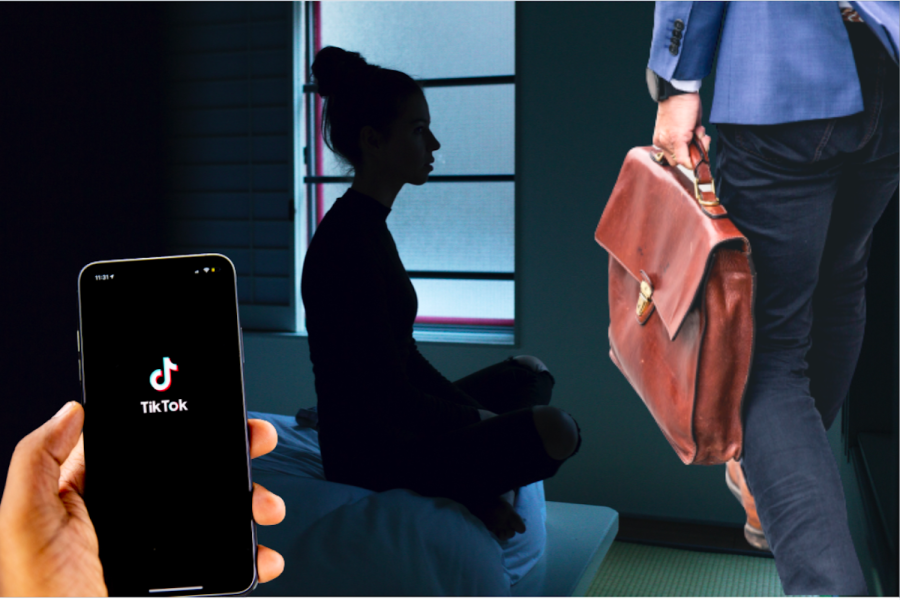 Around 26% of American adults are living with diagnosable mental health conditions annually according to Johns Hopkins Medicine.

Often the first advice given to someone who is upset, or overwhelmed is to “do something to take your mind off of it.” This notion, however, that distracting yourself from the issue is an advisable action to take, misconstrues the idea of ignoring the cause of poor mental health as “self-care.”

The human brain craves rushes of dopamine, a type of neurotransmitter. Dopamine is a chemical messenger that is used to send messages between nerve cells. While dopamine is involved in learning; attention; pain processing; and heart rate, it is more infamously associated with its role in the brain’s pleasure-reward pathways.

In a pursuit for the next hit of dopamine, people often distract themselves from unpleasant feelings. When someone feels anxious, or sad they may watch some Netflix, decompress by scrolling through TikTok, or eat a bowl of their favorite ice cream. While taking these “brain-breaks,” as many refer to them, are seemingly innocent, they can potentially give way to damaging behavior.

Soon, individuals who distract themselves often will suffer the consequences of entering a pleasure-reward feedback loop. After the initial rush of dopamine following the easily accessible distractions, the brain will crave more. A few episodes of a show quickly turn into wasting away a whole day binge watching an entire season. Spending a few minutes checking social media could devolve into spending all your time obsessing over likes and checking other people’s posts.

While more extreme examples of the impact of the pleasure-reward feedback loop, drugs, such as stimulants, opioids, alcohol, and nicotine are addictive because the brain becomes accustomed to the rush of dopamine it receives after the drugs enter the bloodstream.

In this way, such distractions from mental health issues can lead to physical repercussions. While everyone has been taught of the dangers of drug use, especially in hopes of making oneself “feel better,” simpler distractions are not faultless either. Many distractions, such as eating comfort food or sitting around for hours on end have been found to increase the risks of cardiovascular disease, obesity, diabetes, and deep-vein thrombosis, as researched in a study done at Harvard. While these issues wouldn’t arise from a chill weekend every now and then, distracting yourself from your issues will often include distracting yourself from exercise and other health-promoters, and can leave you worse off if made a habit.

“Distractions are not healthy because they don’t resolve the problem and the feelings build up,” says senior Grace Odmark.

However, distractions can also be made in the way of keeping yourself overly busy in order to push down feelings of shortcoming or sadness. Overfilling your plate, while keeping you “productive” is not any more conducive to better mental health than the mindless comforts previously mentioned. While staying busy may allow you to avoid your problems for a short time, it is an ineffective tool for prolonged relief. In fact, multitasking to avoid being alone with your thoughts has been shown to spike cortisol levels, which instead of reducing your anxiety, increases stress and can even lead to fight or flight responses and “burn out.” A second study by Harvard determined that when mental exhaustion sets in, it worsens our ability to focus and concentrate on what needs to get done.

In the end, distracting yourself by mindlessly consuming content, attributing foods or substances to your joy, or even by over scheduling yourself, will be unsuccessful. By participating in such actions, nothing is truly being changed. The true issues remain whether we feel better for the time being or not, and often become more difficult to treat in the future. Some ways that you may be able to better cope with your issues include: meditation, exercise, talking them out with a friend or therapist, or even medication to stabilize any imbalances you may be suffering from.

Lucy Dyer (’22) says, “Often I’ll play softball and keep myself busy. Honestly, I think it can be pretty positive because it helps me refocus. Also, I get to take my anger out in a healthy way.”

It is most important that no matter how you find your best relief methods, that they don’t include “sweeping your problems under the rug.” In order to truly overcome any issues you may be facing, you have to dive deeper into, not shy away from, the truth.