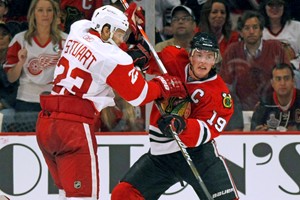 1. WHO WANTS IT? The top seed in the East hasn’t won more than one round in each of the last three seasons, with the Washington Capitals last season becoming the first No. 1 East seed to lose in the opening round since 2002. The Caps and Penguins are again the class of the conference, but is it worthwhile to grab that top overall spot?

2. SID VS. OVIE. Sidney Crosby and Alex Ovechkin get to renew their rivalry on the grandest regular-season stage New Year’s Day, with the Penguins and Capitals meeting in Heinz Field in the Winter Classic. Neither could will his team to the Stanley Cup Finals last season, and Ovechkin has to prove he can lead his team over the long haul.

3. A MESSY SUMMER IN NEWARK. Ilya Kovalchuk is indeed a Devil, but it took some wrangling with the NHL to approve the 15-year, $100-million deal, and Devils president Lou Lamoriello still has work to do to get under the salary cap. Throw in another first-round flameout by Martin Brodeur in the spring, and it’s a crucial season for the most consistent franchise in the East.

4. RISING ABOVE THE MEDIOCRE. The playoff race in the East went down to the final shot of the final game, and then Flyers rode that wave all the way to the finals. There’s still barely a difference in talent level between half a dozen teams in the East — the Senators, Flyers, Rangers, Thrashers, Canadiens, Hurricanes, Lightning and Islanders are still fairly even — so whoever can make the best run down the stretch could be the favorite to emerge from the conference.

5. WITH THE FIRST PICK OF THE 2011 NHL DRAFT . . . The Isles suffered serious injury setbacks already, but they won’t fall that far. The Leafs again do not own their first-round pick — the Bruins could reach the Finals and pick No. 1 — but they’re lottery-bound, not headed straight for the basement. The Panthers, who have GM Dale Tallon trying to right a listing ship, are going to be in the battle for the first overall pick from start to ugly finish.

1. WINDY CITY REPEAT? In a word: No. The Chicago Blackhawks still have the core of Jonathan Toews, Patrick Kane, Duncan Keith and Brent Seabrook, but a lot of the role players were dropped to avoid salary-cap hell. Dustin Byfuglien and Andrew Ladd (Thrashers), Kris Versteeg (Leafs) and Antti Niemi (Sharks) are all gone; Marty Turco has come on to be the No. 1 goaltender, which is a serious downgrade.

2. RETURN OF THE WINGS. Goaltender Jimmy Howard is a year older and wiser and the most complete set of forwards in the league should make up for a slightly-too-old defense. Addition of hometown guy Mike Modano signifies the Wings are ready for one more serious run in the Nicklas Lidstrom era.

3. SURPRISE! COYOTES STILL A MESS. Don Maloney won exec of the year for putting together a winning team in Phoenix — though most of the credit should go to coach Dave Tippett — but the Coyotes are still in financial limbo and last season’s success won’t carry over either in the stands or on the ice. Too many good teams out West, and Ilya Bryzgalov has to prove last season wasn’t an aberration.

4. SHARKS’ MAJOR CHANGE. Out went Evgeni Nabokov to Russia, in came Niemi, a most unlikely Stanley Cup-winning goaltender. With fellow Finn Antero Niittymaki in goal, the Sharks’ new duo should be solid behind the perennial West top seed.

5. RACE TO THE BOTTOM. The Oilers, with Tom Renney wisely taking over for out-of-touch Pat Quinn, won’t make the playoffs, but they won’t run away with the worst record again. The Wild has goaltending but little else; the Blue Jackets don’t have enough of anything, despite a good young coach. The Flames, despite a world-class goaltender, are a mismatched collection of players, and it’s time for the other team in Alberta to sink to the bottom.