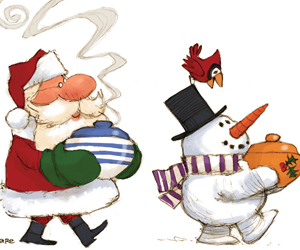 By Nicolas Loris, The Heritage Foundation

Sen. Max Baucus, D-Mont., is doing his best Santa impersonation this year, distributing gifts to certain energy producers — and he’s using your money to do it.

Part of his “tax extenders” bill is a massive special-interest subsidy program that includes handouts for various “green” energy industries. At least, he’s trying to imitate Santa. The Senate rejected his bill in a rare weekend vote. But the major point of contention concerned the income levels for tax cuts.

A coming vote on a new bill, after a tax-cut compromise between President Obama and congressional Republicans, will likely include similar handouts.

Undeterred by an electorate fed up with special-interest politics and wasteful government spending, Baucus’ proposal lavishes special tax treatment on producers of ethanol, biodiesel and biomass. But his generosity doesn’t stop there. He also provides taxpayer dollars and set-asides to renewable energy projects and natural gas vehicles, as well as home energy-efficient products and appliances.

The ostensible justification for this corporate welfare is to protect the environment, reduce dependence on foreign oil, and stimulate the green energy economy. But the truth is much different. In reality, subsidizing uneconomical energy sources hinders economic growth, rewards mediocrity and needlessly wastes taxpayer dollars when the government should be pinching every penny.

An encouragingly diverse coalition, including environmental, hunger, agricultural, developmental and several anti-subsidy groups, sent a letter to House and Senate majority and minority leaders calling for the ethanol tax credit to sunset. More than a dozen prominent Republican and Democratic senators released a letter urging for the policy to expire.

Even Al Gore recently called ethanol subsidies a mistake. So why is there any talk of extending the tax credit?

Because a much smaller bipartisan coalition of senators from the Corn Belt say it’s important for their states. Why won’t the larger coalition win out? Washington politics.

When you lump the ethanol subsidies in with tax cuts for the middle class, it becomes more difficult for a member of Congress to say no. And when the man who introduces the plan, Sen. Baucus, chairs the powerful Senate Finance Committee, it becomes even tougher.

Skeptical that the ethanol policy is more about pleasing special interests and less about the environment and reducing foreign oil dependence? Notice the extension of the protectionist 54-cent tariff on imported ethanol. The tariff discourages imports of ethanol, most notably cheaper sugar cane-based ethanol from Brazil.

Welcome to Washington. It’s all mixed up. All of these handouts, not just the ones for ethanol, concentrate benefits to those industries or technologies that politicians deem worthy — and disperse the costs to the rest of us. Subsidies remove the incentive for industries to become economically competitive and lower costs. They increase the incentive to lobby for handouts and protection.

Taxpayers, meanwhile, are left with the tab. The more government becomes involved in decisions the private sector should be making, the more this trend will continue.

Politicians face incentives, too, one of the primary ones being to win elections. Catering to home-state special interests is one of the best ways to do that. As Al Gore said: “One of the reasons I made that mistake is that I paid particular attention to the farmers in my home state of Tennessee, and I had a certain fondness for the farmers in the state of Iowa because I was about to run for president.”

This may make for good politicking, but it’s definitely bad economics. Subsidizing our way to a carbon-free economy or energy independence or cheap energy isn’t a prudent approach to create a robust and diverse energy market. In fact, it will cause a dependent and stagnant one. When the government selects political winners, it’s usually a good indicator that the technology or energy source is a market loser. After all, if the venture was profitable, it wouldn’t need special treatment from the government.

As President Obama noted in a 2008 speech, “When special interests put their thumb on the scale, and distort the free market, the people who compete by the rules come in last.”

Energy industries should be freed from all government subsidies. That way, they’d rely on innovation and efficiency, not handouts, to remain competitive. In such a scenario, the businesses that deserve to come in first will do so by means of higher profits. The consumer reaps the benefits by having the cheapest energy available.

The American people deserve an energy policy that puts them ahead of special interests.