Chick flick gems for Valentine’s – sifting through the rubble 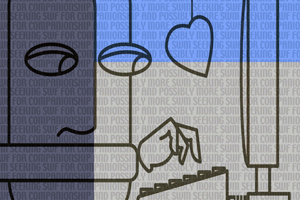 Valentine’s Day is the one time of year all boyfriends are required to a) remember and b) observe. While most will be curled up on a couch with their significant others, others- myself included- will be trying to survive through the holiday with chocolate binges.

Like many girls I know, nothing is more insufferable around this time of year than the inevitable “romantic chick flicks.”  Granted, some go on to be memorable moments in cinema history. Others, unfortunately, star Jennifer Aniston playing the same role she’s been doing since The Rachel was a popular hairstyle choice. Some go on to make this skeptic and general Negative Nancy smile and, dare I say it, tear up. More often than not, though, I do end up crying when watching chick flicks only because the acting or script is so painfully bad.

So, to celebrate a holiday that can easily be seen “glass half-empty” or “glass half-full,” here’s my list of side-by-side films that essentially have the same formula, although one is done right, the other horribly, horribly wrong (well, in a few cases).

The Notebook vs. The Last Song

It almost feels like cheating putting in a movie based on a Nicholas Sparks book, but this comparison is just too easy to make. The Notebook stars the always fantastic Rachel McAdams and Ryan Gosling as star-crossed lovers, separated by wealth and family. One is from the wrong side of the tracks, the other a southern socialite. Their  inevitable separation occurs, only to be reunited to face a life-threatening disease. In The Last Song, Hannah Monta– – Miley Cyrus, who’s desperately trying to grow up as fast as she can, and Liam Hemsworth are two star-crossed lovers, separated by wealth and family. One is from the wrong side of… do you see my point? The problem with these two is while one plotline is not necessarily superior to the other, it is the script editor and the actors who save The Notebook while the people in the same job designations put a stop to Miley’s vehicle to more mature roles . McAdams and Gosling were both young but well-known and well-respected actors while Cyrus is more of a pop star than an actress and one who should stick to the small screen. Her indecipherable, squawking speaking voice, strange almost-lisp and lack of general knowledge of how to actually, well, act, makes her an inferior leading lady in all aspects, as compared to McAdams. All in all, The Notebook has heart and a real sense of self, while The Last Song is awkward to watch and feels as  it is just trying to be something it isn’t.

Before Sunrise vs. Conversations with Other Women

I realize these two films are not very well known, but I just couldn’t bring myself to write about only well- known romantic films when there are so many hidden gems in this genre. Before Sunrise, 1997, stars Ethan Hawke and French actress, Julie Delpy. The two 20-somethings meet on a train heading to Vienna and spark up a conversation. When it’s time for Jesse (Hawke) to leave, he plays a game of ‘What if?’ with Seline (Delpy) and convinces her to get off at the stop with him and spend the night wandering around Vienna, even though they are essentially strangers. A night of deep conversations on topics from what is God, what does it truly mean to love someone and how to become a real adult make them realize that in a world of lack of anything real, they each have found a soul mate.

I won’t ruin the ending, but this is a film unlike any other. Vienna is a stunning backdrop to the story, and both Hawke and Delpy come off  like real people. Most importantly, they’re both very, very intelligent, so while the entire film is essentially a long conversation, it’s gripping and interesting the entire time. A goodbye is inevitable, but when it comes, you as an audience feel connected to these characters and you genuinely want the best for them, whereas with most movies, it ends and you walk away, forgetting their names.

I’m techiniquely (and technically) cheating with the plan I initially set up, as Conversations with Other Women is also a fantastic film. Shot almost like an edgy music video, Aaron Eckhart (Two-Face from The Dark Knight) and Helena Bonham Carter (The Red Queen in Alice in Wonderland) are exes who meet again after years at a mutual friend’s wedding. They spend the night discussing their past, their new loves (both absent, physically and emotionally) and the lonliness one sometimes find in relationships. The film rests on amazing performances by the duo, who are the only characters, with the whole film shot in split screen, so you always see each character’s reaction to each other’s words.  Both films are beautiful pieces of art, directorally, cinematically, acting-wise and, most of all, script-wise, which is something romantic films  lack lately, opting instead for cliches and easy endings.

“Holiday Movies” are essentially the bane of my existence when it comes to films; even the good ones are automatically cheesy, an inevitable effect when holidays in general leave little room for realistic reactions and emotions.

All that aside, the British Christmas movie Love Actually (although not set on Valentine’s Day, it’s still a solid chick-flick)  can genuinely be called a good film because of the stellar casting with Kiera Knightley, Colin Firth, Liam Neeson (my Older Man crush), Bill Nighy, Alan Rickman (Snape from Harry Potter) and the always boyishly charming (even though he’s about 55) Hugh Grant. Each character or pairing has their own story centered on love – a young boy’s first crush, a man in love with his best friend’s fiance, falling in love with someone who doesn’t speak English.  As all of these film types tend to do, they eventually show the connection to each other. There’s one or two storylines you probably won’t find as absorbing, but over all this film is constantly entertaining and heartfelt, even though there isn’t much of a  storyline. I still get swoony in Kiera’s romantic scene and the last Colin Firth scene.

America cinema tried its collective hand at a similar multi-plotlined movie  recently produced as  Valentine’s Day .   I’m pretty sure the producers jammed in as much estrogen into every scene as physically possible. I know some people enjoyed it, but nol. Maybe some parts are cute, maybe the actor is adorable, but no. This is basically the definition of a bad film: phoned-in acting from even the veterans, pathetically bad plotlines and dialogue.  You just do not care about any of the characters or what happens to them. It is a movie simply made to rake in money during the Valentine’s Day weekend and for people to remember that Jessica Alba is still around (even though I rather wish she wasn’t with some of these films. Good Luck Chuck? Anyone? Her character was obsessed with penguins. ) To put it in perspective, people only remember this movie because it’s where the “so cute it hurts” relationship of Taylor Swift and Taylor Lautner started. Taylor Swift is not an actress, but  a country singer. That’s how bad the acting is in this movie.

Again I’m cheating because I adore both of these films, but Diary is quite literally the modern day Pride and Prejudice complete with the main love interest being named Mark Darcy. Quick side note- Colin Firth is actually the original Mr. Darcy as he was in the infamous BBC television movie version of Jane Austen’s novel, and sort of reprising his role by playing this version of Darcy.

Obviously the plotlines are essentially the same, with Diary being a modern twist on it. The 2005 version is with Keira Knightley and a relative unknown playing opposite her as one of literature’s most famous roles, Darcy, is Matthew Macfadyen. Macfadyen, although not as well known as most wanted for the casting decision of such an influential character in pop culture, is often praised by critics for playing the role not as seriously as Firth did back in the 1990s, but with a quiet pain and longing that you can only see as an audience by paying attention to small details- quick glances, a tremor in his voice, his tensed jaw.

Even though Darcy can read flat to some people on the page, we know underneath it is a passionate heart beneath a quiet surface, which is what MacFayden captures perfectly. Joe Wright, the director, who is absolutely amazing, catches the true quiet beauty in Austen’s writing through lighting and cinematography.

Bridget Jone’s Diary, however, is definitely a comedic spin on the famous story; Bridget Jones is a slightly chubby but fantastically witty woman desperately in love with her boss. After an awkward meeting with a man, Mark Darcy, at a Christmas party, she decides to re-evaluate her life and become daring, starting by writing a diary. Her social awkwardness and tendency to say the absolute worst possible thing in any given situation honestly makes me laugh out loud every time I watch this film, which is fairly often, considering that comedies tend to get old after a while, which this doesn’t.

Renee Zellweger is perfectly cast as the endearing but spazzy main character of Bridget, who is less- quick-thinking than the original character of Elizabeth Bennet, but they are both definitely the loveable underdogs in their stories. Diary is relatable, heartfelt and replete with very sharp humor. Most importantly, something that’s so rare in chick flicks- you are honestly rooting for Bridget every second of the movie; you want her to end up with her perfect man, you want her to be happy. Both films are definitely worth the watch, it just depends on your mood.

To use a cliche and famous line from Forrest Gump: chick flicks are like a box of chocolates – you never know what you’re gonna get. It’s easy to get fooled when the wrapping is a good or favorite actor, but a gem in this genre is difficult to find, not because there’s necessarily a small number of good films out there. You just have to wade through all of the mediocre or just plain bad films to find the gems.  Happy hunting, I hope this made the searching a little easier.