PETA plan would spare thousands of thoroughbreds from slaughter 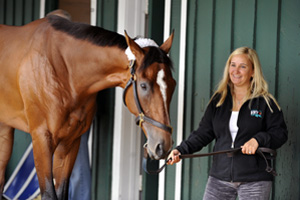 Kathy Guillermo, People for the Ethical Treatment of Animals (MCT)

Crunch those numbers and the conclusion is obvious. There are too many thoroughbreds born, too few retirement options, and way too many violent deaths.

The racing industry should be ashamed of these numbers — and of course every number isn’t a number at all, but a living, breathing being. When horses who have given their all can no longer race because they’re injured or too old, or when they stop turning a profit, most owners and trainers rid themselves of these animals by sending them to a livestock auction. One out of every two thoroughbreds sold at auction ends up in a slaughterhouse.

The Jockey Club, through which all foals must be registered and which is the only horse racing authority in a position to impose a fee that applies to all thoroughbreds in all racing states, responded to this crisis with its Retirement Checkoff program, a voluntary donation that can be made when owners submit required registration papers. In 2010 this program generated only $43,000 from 30,000 foal registrations — a paltry $1.44 per horse. Even with the Jockey Club’s supplemental donation toward retirement, this absurdly inadequate amount cannot begin to provide for the enormous annual costs of caring for tens of thousands of horses, multiplied by many years of retirement. Recent reports of thoroughbreds being denied adequate food and care in the stables that are supposed to be supported by the Thoroughbred Retirement Foundation tragically prove this point.

While the best bet for the horses would be an end to breeding, racing and killing thoroughbreds altogether, at the very least the racing world must provide a decent retirement for the horses it no longer wants.

People for the Ethical Treatment of Animals has come up with a plan — the Thoroughbred 360 Lifecycle Retirement Fund — to jumpstart this effort. This proposal would require a mandatory $360 retirement fee with every foal registration, a $360 fee for every transfer of ownership, and a $360 fee for each stallion and broodmare registration.

This is affordable for thoroughbred owners and would generate more than $20 million toward retirement. It wouldn’t solve all the problems — clearly the fund would have to be used wisely. This would require proper planning and administration. But without a substantial sum, nothing will be done. Thoroughbreds will continue to be trucked across our borders to their deaths by the tens of thousands.

The Jockey Club should implement this plan before this Triple Crown season ends. Trainers and owners have turned their backs on the animals they claim to love for far too long.

Kathy Guillermo is vice president of People for the Ethical Treatment of Animals, 501 Front Street, Norfolk, Va. 23510; www.peta.org. Information about PETA’s funding may be found at www.peta.org/about/numbers.asp.

———
(c) 2011, People for the Ethical Treatment of Animals
Distributed by McClatchy-Tribune Information Services