Wealth in America … an inconvenient truth 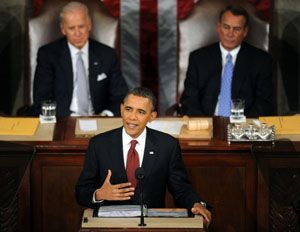 To fiscally conservative observers, President Obama’s State of the Union address sounded like the jargon of class warfare. To die-hard liberals, it may have seemed like hype rather than substance, mere talk instead of intent to change the status quo through an overhaul of the tax system. For all intents and purposes, it does raise important questions about the distribution of wealth in America.

Warren Buffet is the richest man in America. Well, if he has a bad year,  he may only be the second or even the third richest man in the richest country in the world. Either way, he could serve as the ideal emblem for the controversial one percent of this country that wields the most money.

Buffet’s success  is truly a story for the ages, a walking advertisement for the American Dream. Although Buffet has about as much of a claim to a hard-knocks life as Mitt Romney, he still exemplifies cherished American values of hard work and entrepreneurship. Through business savvy that started before he was even a teenager, Buffet steadily elevated himself from a kid who owned a pin ball machine to a man who basically owns one of the richest countries in the world.

Yet, counter to most mega rich Americans, Warren Buffet does not tell the poor that they need to work harder nor does he tell the rich that they are the foundation of this country’s success. No cheeky laissez-faire, let-them-eat-cake proposals emerge from this financial oracle. Instead, he declares vocally that he should pay more taxes.

Astounding. For a man who in some years holds the title of richest man in the world, Buffet pays an incredibly low tax rate, about as much as his secretary and as much as most middle class Americans. Furthermore, he wants not to horde his wealth but to pay his fair share of taxes.

In the typical political talking points of American culture, “class warfare” usually describes wealth bashing. Any talk of raising taxes on high earners risks drawing the accusation that such an actioun would turn America into some sort of European socialist state, while those who bash the poor can do so without having their patriotism questioned.

Take Newt Gingrich. He has unabashedly stated that poor people do not have a proper work ethic. He suggests that the children of the poor should work in their schools as janitors in order to instill in them the work ethic that their parents cannot possibly have.

Interesting. Creating a system where lower income students labor in menial jobs would not create the stigma of class warfare, but having a more equitable tax system amounts to economic discrimination.