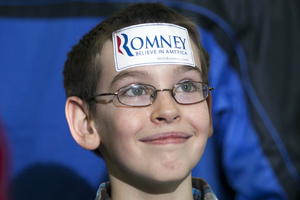 As November 6 draws nearer and nearer, Presidential candidates boost their campaigns with a bombardment of commercials, bumper stickers, and the ubiquitous lawn sign. Each one of these placards bears the usual “Romney 2012” or “Gingrich for President.” With the usual generic mantras, how can a wannabe Commander-in-Chief expect the average American to discern the differences between himself and others? The answer lies in the campaign slogan.

Every candidate, or at least every candidate who takes his campaign seriously, features a simple phrase on each piece of his propoganda. This phrase, though seemingly mundane, was undoubtedly developed, debated, and perfected by the nominee’s public relations staff after hours of non-stop brainstorming. Though short in length, it carries volumes of depth that aim to persaude readers and voters of the credibility, determination, and overall patriotism of the Capitol Hill hopeful.

However, the vast majority of these political jingles fall short. They are overused and somewhat condescending pieces that draw either the ire or the yawns of Americans. Let’s take a look:

Mitt Romney heads his 2012 Presidential campaign with the slogan, “Believe in America.” This imperative insinuates that, by not voting for Mitt, an American citizen may show strains of dislike towards his homeland and may not hold dear the patriotism that Mr. Romney apparently fosters. If you do not vote for him, then you clearly do not like your American neighbors, your American-made goods, and surely the great USA itself. This stance comes across as something of a bullying tactic, never a good modus operandi for attracting votes.

On the other hand, Rick Santorum is “Fighting to Make America America Again.” The United States has undergone a significant number of changes since its inception in 1776. This nation has witnessed slavery, the Federalist Party, Prohibition, and numerous other matters that no longer exist, and the appearance of America differs greatly from that of the original union under the Articles of Confederation. By golly, it basically changes with every President. Could you specify a period that you believe defines America, Mr. Santorum? Is it the early 1800s and strict Constitutionalism of Thomas Jefferson? Perhaps the imperialist-esque ventures of Teddy Roosevelt at the beginning of the twentieth century? Or maybe the more recent, biting-off-more-than-he-can-chew office of Jimmy Carter in the 1980s? This theme leaves too many questions unanswered– answers that Santorum does not provide.

Of course, these mediocre slogans are not an unprecedented trend. They made an appearance in the 2008 Presidential election, won by Barack Obama under the singular word, “Change.” Americans expect more from a man whose posters bore a pop-culture-spawning, red, white, and blue image of his face and whose wife starts nationwide fashion trends. The verbage “change” is unoriginal, quite frankly. Has “change” not been what every other Presidential nominee has promised since these races commenced?

Candidates should take note of Dwight Eisenhower’s “I Like Ike” campaign from 1952. It is simple, clearly communicates its point, and leaves no room for gray matter–something the twenty-first century candidates have failed to do thus far.