CFLs are an easy way to go green with benefits 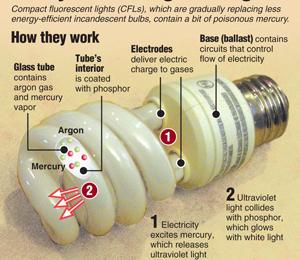 What’s that in the sky? Is it a bird? A plane? No, it’s a Compact Fluorescent Lamp (CFL).  These light bulbs that are safe for the environment and a cool way to save energy. Edmund Germer first invented this swirly light bulb in 1926 as a long tube rather than the fun swirl we recognize the CFL by today. CFLs reduce the carbon footprint, last longer than the average bulb, and use less energy and money to operate.

Almost every home and building in America has electricity produced by burning coal, which releases harmful greenhouse gases into the air. If all incandescent bulbs were replaced with CFLs, there would be a smaller carbon footprint on this planet because CFLs use one fourth of the power incandescent bulbs do. According to energy expert Larry Gilman, “Electric lighting causes carbon dioxide emissions equivalent to 70% of those from passenger vehicles… If every American home replaced just one incandescent bulb with a CFL, the carbon dioxide savings would be roughly equivalent to taking 800,000 cars off the road.” This small change can make an impact on global warming on this planet.

The average CFL lasts four times longer than the typical incandescent bulb. The long life span of this bulb will have a long-term effect on the environment and create less waste. A CFL does cost more money upfront than a standard light bulb, but it ends up “costing less despite their higher upfront costs” because of its long life. What consumer would rather pay for a cheaper light bulb now and have their children pay for the consequences later on?  However, most consumers are still unaware of the benefits to the environment by buying CFLs.  obably not one parent, but many Americans , or go for the one that has more bang for your buck?

CFLs use one fourth of the power incandescent bulbs do. The extra energy can then be used toward other resources, such as air conditioning and household appliances. Another factor regarding energy is that unlike conventional light bulbs that “operate on the principle of heating a small wire until it glows brightly… and is turned into heat, not light,” CFLs use actual light to brighten a room.

CFLs only convert 30% of the electricity into heat, unlike the 90% incandescent bulbs put out. The heat causes rooms to be warmer, needing more air conditioning, which means more money spent on removing the unwanted heat. It is a never-ending cycle where energy here-and-there is being tossed around like there is no price to pay. In today’s society, every resource we have is so valuable, why waste the energy that will soon be lost?

Compact Fluorescent Lamps contain mercury, which is toxic to humans and the environment. However, the coal, which is burned to power the incandescent light bulbs, releases power too. Since the CFLs do not burn as much coal, “an incandescent bulb causes the release, on average of about 3.7 times more mercury… than does a CFL.” If recycled and cleaned-up properly, the mercury in the lamp will cause no harm to humans and the environment.

The reduction in the carbon footprint, cost, and energy are all benefits for using the compact fluorescent lamps. The world we live in is so fragile. With just one simple change, the planet can grow stronger so that our grandchildren may be able to enjoy the pure beauty this planet has to offer.