The Trayvon Martin case: Is America really beyond race? 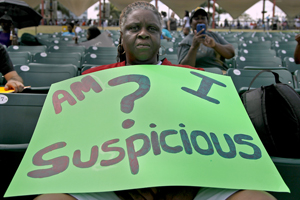 Ice tea, skittles, and a hoodie. These three items have become infamous in their connection with the shooting of Trayvon Martin, a 17-year-old African-American teen who was fatally wounded by a neighborhood watch volunteer, George Zimmerman,  as he was walking in a gated neighborhood in Sanford, Florida, a community in which Martin’s father lived.

Unarmed and bearing only his sweatshirt, cell phone, an ice tea, and Skittles,  Martin has become the center of media attention, not only from sports teams but by influential black activists, such as Reverend Jessie Jackson, who have rallied behind the slain young man as a victim of lingering racism in America.

In Miami, Martin’s hometown, public rallies have called for the immediate arrest of Zimmerman. Zimmerman, who is himself a minority of Hispanic descent, had made, just  prior to the shooting, a 9-1-1 call in which he made several disparaging remarks about African-Americans. Although he claims that Martin was the aggressor, there is no present evidence that Martin started the attack.

According to Martin’s family, their supporters, and those who were in the vicinity, Martin’s death was a result of racial profiling. They point to Trayvon’s text messages as proof that Zimmerman targeted him as suspicious simply because he was a black male in a middle-class neighborhood.

Zimmerman claims, and has so far received, immunity under Florida’s Stand Your Ground law, which allows individuals  to use violent force in order to defend themselves. However, if Zimmerman were found to be the aggressor,  the law would not be applicable. Government task forces have assembled to evaluate both the controversial law and Zimmerman’s controversial actions.

Trayvon Martin’s death, whether or not it was provoked, has brought forth once again the issue of racism in America, especially towards young black males.  After President Obama’s historic election, optimistic pundits heralded the dawn of a “post-race” society. With the incendiary rhetoric surrounding Trayvon’s case, it appears that the issue of race has not yet disappeared from American society.