Academy recognizes achievements of Class of 2012 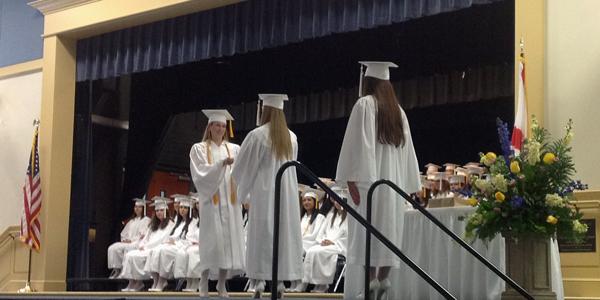 The sun shone brightly on Academy as the Class of 2012 convened in the Brady Center for the Senior Honors Convocation on Friday afternoon, May18. In attendance were parents, administrators, teachers and students in grades 9-11.

Class President Reena Martinez, who was selected by her classmates as Outstanding Senior, set the tone for the convocation in her opening address, in which she reminded seniors, “As we move to the next phase of our lives, let us keep in mind these simple, yet profound words about character: ―We must adjust to an ever-changing road…while holding onto our unchanging principles.”

The final awards, presented in the second half of the two-hour program, all keyed into the same principles mentioned by Martinez. Mary Green received the American Legion Award for outstanding character, scholarship, leadership, and service. The winner of the Mother Marie-Rose Durocher Alumnae Award, presented by Alumni Director Mrs. Patty Bohannon, was Cavesha Anderson, who possessed the qualities fostered by Mother Marie-Rose, including character, service to others, and dedication to the AHN community.

Victoria Sierra received recognition as AHN Good Citizens nominee for the DeSoto Chapter of the National Society -Daughters of the American Revolution, while Allison Babin received a scholarship award from the Mizzou Alumni Association of Tampa Bay.

One of the special father-daughter moments was the presentation of the Type 7 Air Force ROTC Scholarship by Lt. Col. Shannon Meade to his daughter Darby Meade.

Next Martinez returned to the lectern once more to present the check for Senior Endowment. On behalf of the Class of 2012, she proudly handed Mrs. Patti Bohannon a check for $67,295,which represented the entire effort of the seniors through hosting school events throughout the year.

Mrs. Darcy Dwyer announced the college choice of each student, who stood to be recognized by the entire audience. Once again the economy and Bright Scholars kept many girls in Florida, Many girls decided to stay close to home, with forty-three of the seventy-six members attending schools in Florida, while some chose to pursue educational opportunities across the nation as far away as New York and California.

For more information about college choices of this year’s seniors, check out the answers to Achona’s Mascot Madness quiz.