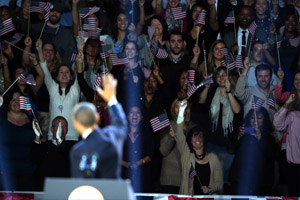 The 2012 Presidential Election has finally come to a conclusion! No longer will your favorite television program be plagued with political ads that berate politicians from both parties. Around 11:30 yesterday evening, news outlets began declaring President Obama as the winner of the Election.

Twitter immediately blew up with tweets from both Romney and Obama supporters. In fact, social media sites provided the most up to date updates to users. Many Americans found out who their next president would be via Twitter or FaceBook.

Control of the House majority went to the Republican Party, while the Senate was split fairly evenly. Many Americans fear that the liberal President will not be able to accomplish much with a staunchly conservative House and that bipartisanship is the answer to uniting the country.