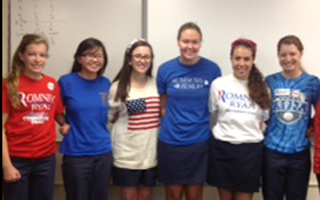 No surprise – Mitt Romney is the winner of the Presidential race- well at least at Academy.

On November 6, the official Voting Day, AHN’s new Social Studies Honor Society chapter, Rho Kappa Durocher, hosted a mock presidential election.  Rho Kappa members divided in half, one group represented the Democrats and the other, the Republicans.  These groups created informative posters to aid each student in deciding who is the best presidential candidate to win her vote.

On Voting Day all students received an email from Survey Monkey with instructions not to open the email and take the survey until the beginning of their history class.  Students not taking a history course this semester voted in homeroom.

Students received an “I Voted” sticker following the election.  The winner of the mock election was announced the next morning.

Students were encouraged to add to the spirit of the election by wearing red, white, and blue. All throughout the school, girls proudly wore American colors and shirts in support of their favorite candidate.

Senior Felicia Nelson was enthusiastic about the benefits of the mock election. “I think its a great opportunity for high school students to become more informed about the voting process.  Even though many girls are not old enough to vote, it teaches them that they can make a difference in the future and how important it is to practice civil responsibility.”