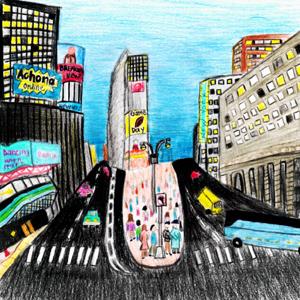 All characters appearing in this work are fictitious. Any resemblence to real persons, living or dead, is purely coincidental.

The crisp autumn air ruffled the leaves of the trees. Fall had made its presence apparent with its red orange leaves and cool breezes. It was October 31, and sixteen-year-old Francesca Simonelli could only think about whether or not she would attend a Halloween party tonight. She sat with her best friend Danika Lawrence upon the steps of the Metropolitan Museum of Art. The girls had known each other since freshman year and were closer than ever.

“Franny, please go tonight.  I don’t want to be all alone.  God forbid Vin try and make a move on me!”  Danika pleaded.  She had been attempting to convince Francesca to attend the annual Halloween party this year, but to no avail.

“Dani, calling me Franny is not going to convince me to go, besides Andrea and Mel will be there.  I promise they’ll protect you from Vin’s advances,” Francesca responded with a small smile.

“I guess.  We are really going to miss you though! I just don’t understand why you don’t like going out on Halloween!  You’re not part of some weird cult or something, right?” Danika questioned.

“No, I promise I’m not in a cult.  I just don’t like going out on Halloween.  It gives me the creeps.  Look, I’m done explaining myself. I’m not going and that is that.  You are welcome to come over afterwards.  Now let’s get to school before we’re late again.”

“Fine. We’ll come over afterwards.  But if Jacob Cooper asks about you, I’m telling him that you’re at home crocheting a cat sweater for Ollie,” Danika threatened.

“That’s just cruel.  So much for being my friend,” Francesca said.

“Well that’s what you get for being an anti-social,” joked Danika.

The two girls linked arms as they walked the four blocks to the Convent of the Sacred Heart, laughing the entire way there.

Thankfully for Francesca, the school day passed quickly.  As Francesca entered the lobby of her apartment building, she noticed a familiar man waiting at the elevator.

Her uncle turned around and smiled at her.

“Hey, Franny! You seem to be getting taller every time I see you!” Sal exclaimed.  He embraced Francesca in a hug. The elevator opened before Francesca could respond.  She and Sal entered the elevator and he pressed the PH button.

“Yeah, don’t be fooled.  I had my growth spurt ages ago.  These shoes give me a little extra lift.  I didn’t think you’d be in town this week.  I thought you were still in Sicily,”  Francesca said.

“Well, there was a change of plans, Franny.  Would you happen to know if your parents are home?” he asked.  As soon as he did, the elevator doors opened,  and they found themselves inside the lavish Simonelli penthouse.

Francesca took off her coat and hung it in the closet to her left.  She turned around, and Sal was gone.  Francesca rolled her eyes and just went to her room, not even bothering to find her mom.  She knew her Uncle Sal was a trouble maker, and she didn’t want to get involved in his tactics.  She changed into jeans and a long-sleeved thermal.  As she made her way to the laundry room with her crumpled uniform, she noticed her mother and uncle having a heated exchange in the foyer.

“Paolina, I just want to speak with him.  The job in Sicily didn’t go as I planned, and I could be in huge trouble with the boss, “Sal explained.

“That’s enough, Salvatore!  I refuse to let you pull our family into this madness again!” Paolina responded, clearly upset with her brother-in-law.

“Whatever Paolina! Just tell Joe I came by.”

With that her uncle stormed out of the foyer and made his way to the elevator. Paolina sat down on the burgundy sofa.

Francesca unveiled her presence as she walked into the foyer.

“It was fine sweetie.  How was school?”

“All right. Are you and Dad doing anything tonight?”

“Probably not.  Don’t you have a party or something?”

“No, I’m not going anywhere.  I’m going to visit Michael, if that’s okay.”

“That’s all right.  Just don’t distract him from his work. ”

Francesca could not get out fast enough.  She grabbed her coat and rushed to the elevator.  Her mind was racing. What happened in Sicily? Why did her Uncle Sal need to talk her Dad? And who was this “boss”? A million questions were flying through her head.  Francesca wanted answers, and she knew exactly where to find them.

“Hi, I’m here to see my brother, Michael Angelo Simonelli,” Francesca said to the women sitting at the front desk.

“He should be on break.  Go right in Francesca,” the woman said with a smile on her face.

Francesca walked to her brother’s office.  For a twenty-two year old, Michael had been successful in the stockbroking industry.  He already had his own office and parking spot in the garage.  Of course, being the son of the CEO had its perks.

Francesca entered,  and her brother’s face lit up.

“Mike, you live right across the hall.  And please don’t call me Franny.”

“Francesca is such a mouthful.  Yeah I do live across the hall, but Dad has me working like a dog. What’s up? You never visit unless you need something.”

“Well, I need some answers.  Zio Sal came to visit today.  I overheard him and Mom arguing about some “job” in Sicily and about some “boss.” Look, I’ve seen enough Godfather movies to know what this means.  I just want to know what Dad is getting involved with. I’m praying that this doesn’t mean what I think it does,” Francesca explained. She knew she was rambling, but she just couldn’t control herself.   She searched Michael’s face for an answer.  His hazel eyes softened, and he sighed.

“Fran, sit down.  I’m only telling you this for your own good. You can never repeat any of this to anybody. ”

She complied and prepared herself to hear what her brother was about to reveal.

“A long time ago, Dad and Zio Sal were a part of the Genovese family.  Dad rose really high up in the ranks.  He was almost two steps away from becoming an acting boss.  But, after he met mom, he resigned.  He gave his spot to Sal.  Now, things aren’t going so well for the Genovese family, and they’re trying to get Dad back in. They’ve been coming around the office these past few weeks.  Just be careful, Franny.  You don’t want to get involved with those guys. They’re bad news. I love Zio Sal, but what he does is way too risky.  People get hurt in that business.  Just don’t stay out too late.  The last thing we need is anyone in this family getting hurt.”

Francesca nodded, trying to process everything she had just heard. She knew there was a mafia working in New York.  She’d have to be a fool to think otherwise.  However, she never thought her father would be involved.  She pictured her father in a tuxedo, stroking a white cat while delegating hit men.  Had her father killed people? Did he have a stash of guns and cash in his sock drawer? Now Francesca had even more questions than before.

Michael noticed his sister’s confusion.  He felt bad that he went against his father’s orders and told Franny, but it was only fair. Michael would feel terrible if anything happened to Franny.

“Look, I know it’s a lot to take in.  Just go home and relax.  I promise you that everything will be okay,” he consoled.

Franny nodded and said goodbye to her brother.  As she left the building, she noticed that night had fallen.  She wrapped her coat tightly around her, trying to keep warm.  She walked to the nearest subway station, and boarded the train.  She sat down and she looked out into the darkness of the underground tunnels.  Despite Michael’s consolation, she felt scared for her family.  If anything happened to her parents or her brother, Franny would be devastated.  Who did these guys think they were, to force her father into a life of crime?

The train stopped, and Franny left the train.  As she exited the station, she couldn’t help but feel as if she were being watched.  She began to walk the three blocks to her apartment building.

As she walked past an alley, she heard a commotion.  She stopped to see what was going on.  In the alley, she saw two men in a heated conversation.  Franny could barely make out what they were saying since they spoke Italian.

Then the larger man took the smaller one by the neck and shook him. Franny’s heartbeat was racing,  and she was breathing heavily.  The man who had been shaken slid to the floor, looking lifeless.  Then the larger man, looked straight at Franny.  He quickly got in his car and drove towards her.  Franny ran down the sidewalk as fast as she could.

The car continued to follow her so she ran down an alley.  The man stopped the car and then got out.  He started to chase Franny on foot. Franny couldn’t feel her legs.  Her lungs were burning from the cold air, and her eyes were watering, blinding her.  As she ran, she tripped on the cobblestone.  The man grabbed Franny by her coat collar.

“I know who you are.  Giuseppe sent you, didn’t he?  You’re his daughter.  You saw nothing tonight.  I swear if anyone finds out you and your family will pay, ” he said.

Franny froze.  She couldn’t think, breathe, or move.   She thought it was the end for her.

Then she saw headlights coming her way. The car skidded to a stop, and a big burly man got out the car.  He hit the man over the head with his bare hands.  Francesca fell to the ground while her dad grabbed the man and shoved him against the wall.

“Don’t ever put your hands on my daughter. Now leave before I do something that I’ll regret,” her father growled.  He took Franny by the hand and put her in the car.  Franny was trying to understand what just happened, but she couldn’t.  She wasn’t sure who the man was and what he wanted with her.

After a few minutes, her dad looked at her said, “Franny, I know you’re confused, but I’m back in the game and after what happened tonight you are too.”