Should federal government be allowed to rescind state laws re: gay marriage? 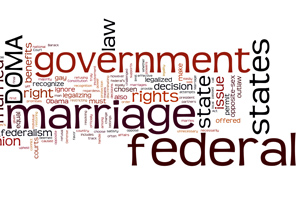 The conflict over states rights for same-sex couples has caused debate among those who favor or oppose gay marriages.

If same-sex marriage is legal in a state in which a same-sex couple marries, then the same federal benefits should be available to this couple because, legally, the marriage is the same.  States have the right to outlaw or permit this legal union; however,  the federal government has often chosen not to recognize this state law and right, regardless of the states’s decision.

DOMA has been challenged by many federal courts, but the Supreme Court will have to make the final call on whether the law is unconstitutional.  These federal courts have claim that DOMA, especially Section 3, is unconstitutional because it does not satisfy the equal protection  aspect that the Constitution promises to the country.  DOMA does not upheld true federalism because the law does not respect those states that have chosen or will choose to legalize an issue given to them to handle, but only supports those states that still outlaw same-sex marriage.

President Obama is on the right track to resolving this issue, extending equal rights to all married couples, and restoring federalism.