Pope John Paul II serves as inspiration to all 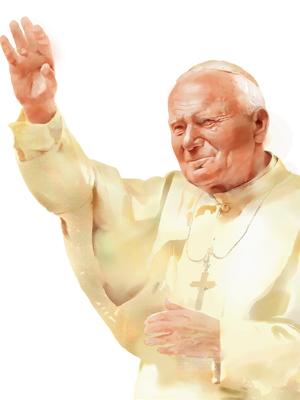 As a young Catholic, I am delighted to hear about Pope Francis I’s election, especially because Pope John Paul II had been an inspiration to Pope Francis I when he was a priest.

I hold a lot of respect for the Papal position.  When I was a child, I thought that those in such high positions never affected me.  However, my perspective changed when my brother became ill.

In late 2006, my family and I moved to Rome, Italy.  My father works in Homeland Security, and he was fortunate enough to hold a position at the American Embassy.

While I was there, I learned about the Eternal City. I had never experienced anything more than my hometown of Tampa, Florida.  I met people from all over the world and saw cultural beauty that only some dream of.

Despite experiencing all these wonderful things, my family still underwent some hardship. My younger brother, Kenny had been struggling with the developmental disorder autism for the past few years.

However, during our time in Italy, my brother regressed.  On top of that, we discovered that he suffered from epilepsy. In February of 2007, my brother had a severe seizure and seized for forty minutes.  I’m no doctor, but I knew that a forty-minute seizure is not healthy.

Our apartment was only one bus ride away from Vatican City so my grandmother looked to divine assistance.  My grandmother always had an affinity for the late Pope John Paul II, so she went to his grave almost every day.  I never really thought much about praying to saints, but I would do anything to take the pain from my brother.

After a few months, my family found Kenny to be recovering.  Not only was he taking seizure medication, but he was also learning and expanding his vocabulary.  My family truly believes that praying to Pope John Paul II has helped my brother. In his room hangs a portrait of Pope John Paul II.  From then on, I always pray to him every night and my brother has a portrait of him in his room.  I finally believe that through prayer and faith anything is possible.

So I wish Pope Francis, who was personally encouraged in his ministry as priest by John Paul II, all the best.  I know that he will lead our Church with wisdom and holiness.