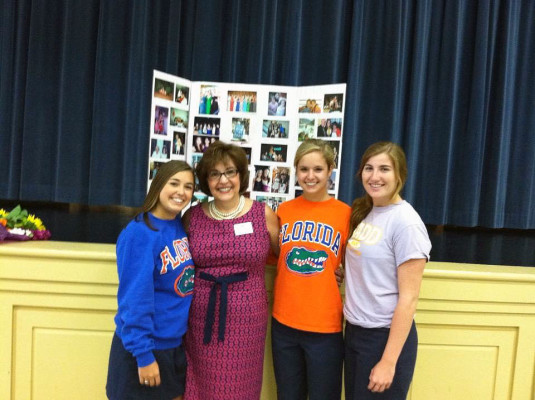 With Prom and summer approaching soon,  Students Against Destructive Decisions (SADD) organized a short assembly on Wednesday, April 13, to emphasize to Academy students the problems related to binge drinking.  The presentation featured AHN alumna Mrs. Angie Ammon A’76. Ammon came to her alma mater to inform the AHN high school about the dangers and consequences of binge drinking. Ammon shared her story about her daughter Molly.

“She (Molly) was beautiful, she was a great friend to her friends, she was a straight A student, she got into every college she applied for, she got into her first choice for a sorority. Everything was going Molly’s way.”

During Molly Ammon’s freshman year at the University of Florida, she returned to her hometown of Tampa to spend time with family and friends. On the last day before Ammon’s return to Gainesville, she went to Madeira Beach with some childhood friends. During the night, Ammon drank excessive amounts of alcohol and was put to bed by her friends. However, during the night Ammon died from heart failure due to alcohol poisoning.

Mrs. Ammon explained that Molly needed to go to the hospital and have her stomach pumped in order to cleanse her body of the alcohol. Ammon also informed the high school with staggering statistics.  “According to the Center for Disease Control (CDC) in November of 2010 4,700 girls suffered from complications due to alcohol poisoning. In 2012, the number of girls was 23,000.”

Finally, Ammon left the high school with a final message.  “ I would love for my message to be just please remember this story and don’t drink. But I’m a realist and I know a lot of you will. So you need to know what to do when you’re with a friend who has had too much to drink. Call for help.”

Following Mrs. Ammon, Jesuit High School alum Jordan Perhosky ’10 began his presentation regarding the consequences of drinking and driving.
As a freshman at FSU, Perhosky possessed a plethora of opportunities.  He was young, intelligent, and ” invincible.”However, he made the decision to drive while under the influence and injured a women.  Last name, was convicted and sentenced to 11 months in prison as well as probation.
Junior Theresa Lopez  found Perhosky’s message an important one.  ” He emphasized how our decisions not only impact ourselves , but they also affect others.”
Perhosky shared his remorse for his decision.  ” The pain is real, the guilt is real. No amount of jail time , no sentence will ever take that away.”

Both speakers emphasized how important it is to call the Crisis Center of Tampa Bay at 211 when in doubt about aoneself or a friend who is struggling with the effects of alcohol.