I can’t let them know 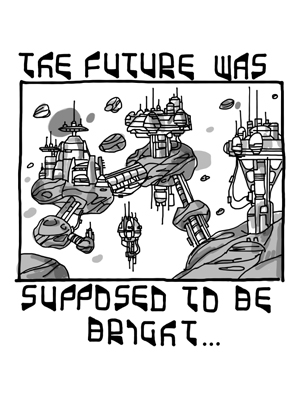 I continued to walk down the tunnel. It seemed as if that’s all anyone was
doing these days. You just walk and walk through these seemingly endless tunnels.

Sometimes I’ll stop to peer out the window, but it’s the same sight each,
and every time, darkness. There is an occasional glimmer of a star, but it is
a rarity.I’ve even started to make wishes on it.

I don’t really know what happened, or even how it did. All of a sudden
everything had changed. I do miss how things used to be. It’s horrible
not to be able to leave. You could try but you would plunge into the
unknown as our new world is suspended in the galaxy.

There are people everywhere, but I still feel so alone. No one speaks, no
one even makes eye contact. I try to converse and even lock eyes with the
others, but nothing. There is no life in their eyes, just a dead stare ahead.
All they do is walk. They don’t even stop to look out the window as I do.
I haven’t quite figured it out yet, but I know something’s wrong.

There are others- different kinds of people. They walk in the opposite
direction. I can hear them talking to each other. When they pass, I never
break my gaze to look over at them or speak to them. They don’t come around
often, but he they do, I try to hear what they are saying.

I think they are the ones in charge, the ones running everything. I’m afraid
if they notice, I can still think they will change me as they did to the others.