A task to ask 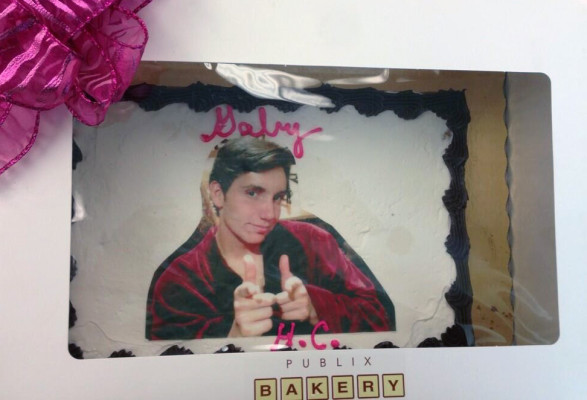 "All I saw was his face, and then I noticed it was a cake" Junior Gaby Ruiz recalls.

You’re lying if you tell me that approximately a month ago you weren’t wondering if you’d be asked to homecoming and, more specifically, how. This year it seems to be the trend to be asked in more elaborate than traditional manners. It feels like it used to be so simple, a guy just called you up, as easy as that. Nowadays, expect to be asked in a more dramatic, idyllic, cheesy, high school cliché way. Teddy bear, roses, cookie cakes, you name it. Some of the stories this year have truly surprised and honestly impressed me. I tend to doubt the creative and thoughtful capabilities of teenage boys, but this year has proven me wrong. Maybe I’m just hanging around the wrong guys? Since I grew up watching Nora Ephron films and Cinderella on loop, I secretly live for these hopelessly romantic gestures, and couldn’t help but want to publicize these stories.

Sophomore Carolina Oliva’s date Mayson Aktinson froze a piece of paper inside a block of ice, and told her to “break the ice.” After (literally) breaking the ice, she retrieved the paper trapped inside which read, “Now that we’ve broken the ice, will you go to Homecoming with me?”

Academy junior Gaby Ruiz was just walking to study hall when Mrs. Valdez stopped her to let her know that there was a delivery for her. When she walked to the front desk there was big bag with her name on it. She opened it to reveal a cookie cake with a picture of her date Stephano Mastro’s face on a cookie cake and the words, “Gaby HC?”

My favorite story came from senior Cassidy Gourley and her boyfriend Julian Velez. On what could very well be considered their first date when they were just sophomores, the two went to see the Academy’s production of Grease. Unbeknownst to Cassidy, Julian had saved the play bill, and two years later he blew up the program to poster size. When the playbill was opened, it revealed a picture of the two at their first Homecoming sophomore year titled “Act I” followed by a picture of the couple at junior Homecoming titled “Act II.” He had left the “Act III” part blank, and wrote “One last time?” Naturally she said yes.

There are many ways to be asked to homecoming, whether a guy is standing outside your window waving a boom box like John Cusack (it’s a dream) or simply calling you on the phone, no one way is better than the other. In actuality it’s more about who’s asking you. Hope you all have a great time this homecoming, whether you’re sitting in bed watching Netflix or going with a guy you barely know or going with your best friend.