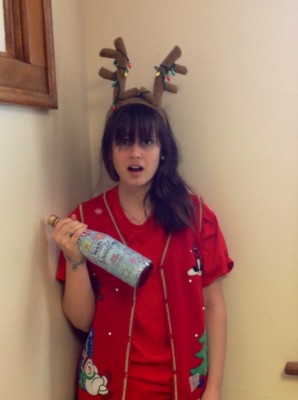 Clearly not following my own advice to "look presentable", with my antlers and sparkling grape juice.

When I was younger, I was completely and utterly convinced that my family was insane. For the most part, this assumption was pretty accurate. But as I’ve grown and encountered the relatives of other friends and acquaintances, I have come to realize that you’d be hard pressed to find a single family that isn’t a little bit off. Perfection does not exist when it comes to family, and it especially doesn’t exist when it comes to extended family.

Yes, yes, every family has that one (or six) cousins who has dabbled in hallucinogens, many families have the 40-year old aunt who shows up with a 24-year old date, you’ve got the stereotypical uncle who has had one too many beers, the grandmother who kindly reminds you that you look better since putting on weight (but that she hates your new haircut), and the crippled dog with three legs (maybe that’s just me). I’m sure at least one of these sounds vaguely familiar. Or maybe your family really has it together, and every family gathering is a scene from a Norman Rockwell calendar; it seems unlikely though.

So I thought I’d give some advice for this lovely season of giving and awkward encounters with relative who you sort of pretend to know. There are a few very simple steps I have followed year after year, I’m not saying they’re good steps, and I’m not saying this is the best advice, but hey you have to do what you have to do to survive (Social Darwinism at work, am I right).

Tip one. Saying hello comes first. Avoiding comes second. This means that when you enter a gathering, walk around and say hello to everyone, yes everyone. Give them a hug, give them a kiss – if your family rolls like that. If, like me, you take after your German rather than Hispanic side (and are cold and emotionless at heart), grin and bear it. You’re going to have to partake in a little bit of meaningless small talk. No need to delve into anything deep. If your random half cousin asks you if you have a boyfriend, feel free to throw out a random name (lesser known celebrities are a good go-to). By this point you’ve probably had at least one encounter go astray, and if not, you’ve at least witnessed one go astray.

“How’s Spot?” you hear your dad ask your great aunt.

“Spot died, actually,” she replies somberly. Alright then. Better dad than me.

Now on to phase two, avoidance. Avoidance at all costs. You’ve said hello, you’ve been all sorts of friendly, and you even told your aunt her hair looked nice. You’re the relative of the century! You’ve given people the false sense that you’re actually a really friendly person. You deserve to be anti-social and sip on Eggnog in the corner. But the sad truth is you can’t stand alone, because trust me, some overzealous relative will mistake you for lonely, rather than perfectly content, and strike up conversation. So before this becomes your fate, find an ally, someone who’s just as unfriendly, antisocial and unpleasant as you. Someone whose company you genuinely enjoy (shout out to you, big sis, you my girl). Once you find that person, you may continue mutually avoiding uncomfortable small talk with your great uncle together.

Lastly, you may think that appearances don’t matter when with the people who love you unconditionally, but you’re wrong. You’re very wrong. If anything you may be more judged with your family than with anyone else. I’m not saying you have to look like a runway model, but learn from my mistakes. Don’t show up in your uniform wearing no makeup; it can only end in misery.

“Aii, Khalei, you look so tired, what’s wrong with you?”

Your grandmother may or may not ask in a heavy Nicaraguan accent, and believe me she won’t be the only one. Put a little makeup on, throw on a dress, take a shower.

I know what you’re thinking, “this girl forgot to take her anti-depressants this morning.”  I swear I’m not the Grinch, but much like my family, I’m nowhere near perfect. Family can be overwhelming at times, but just keep in mind how dull and uninteresting your life would be without that extra dose of insanity this Christmas season.