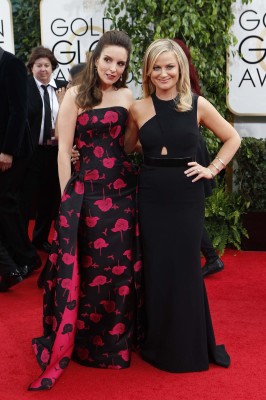 8:01- Tina and Amy begin with the first wardrobe change of the evening.

8:14- Jacqueline Bisset (Dancing on the Edge) wins best supporting actresses in a series, miniseries, or TV movie. She was sitting so far away from the stage it took her about two minutes to reach the stage. She gives one of the weirdest speeches ever and it doesn’t stop until about two minutes after the stop talking music starts playing.

8:22- Behind the Candelabra wins best TV miniseries. It takes them over a minute to reach the stage. What’s up with the seating arrangements tonight?

8:25- Best Actress in a television movie or miniseries goes to Elizabeth Moss (Atop of the Lake) wins. Don’t know who she is, but her dress is super sparkly.

8:37- Aaron Eckhart and Paula Patton, who is wearing by far the strangest dress of the evening, present best actor in a TV series to Bryan Cranston (Breaking Bad). All is right with the world. Once again it takes him forever to get to the stage.

9:05 Olivia Wild introduces Her (The movie where Joaquin Phoenix falls in love with his computer.)

9:27- Best screen play goes to Spike Jones for Her.

9:40- Best foreign language film to The Great Beauty from Italy.

9:43 Jimmy Fallon and Melissa McCarthy, doing a Matt Damonimpression, present Best actor in a TV miniseries to Michael Douglas (Behind the Candelabra). What’s up with making fun of Matt Damon tonight.

9:56- Amy Poehler (Parks and Recreation) wins best Actress in a TV series- comedy. She made yet another wardrobe change.

10:02- Woody Allen wins the Cecil B. DeMille award, which I’m assuming is a life time achievement award. He apparently didn’t show up, so Diane Keaton accepts on his behalf.

10:20- Best TV series-comedy goes to Brooklyn Nine-Nine. This is both very impressive and unexpected.

10:26- Leonardo DiCaprio wins best actor in a film-drama. This is the first time he hasn’t been snubbed for an award about ten years.

10:56 Johnny Depp, looking like he’d rather be anywhere else, presents best motion picture drama to 12 Years A Slave.