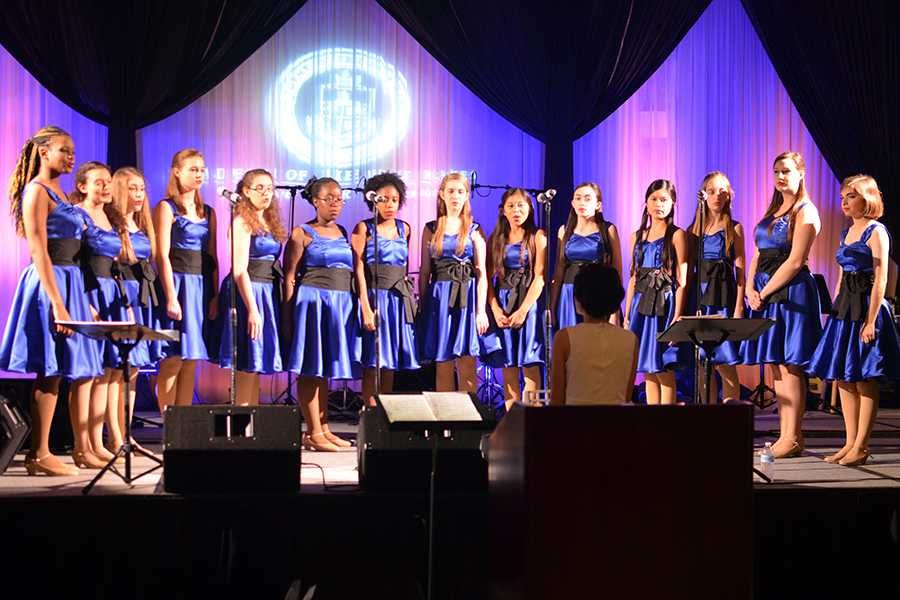 Adorning their brand new blue and black dresses, AHN’s Quarter Notes were prepared to sing before all the guests attending Black and White by the Bay, Academy’s annual Auction at the Grand Hyatt. The three pieces that the show choir chose to perform were probably the most difficult arrangements they have attempted this year: The “Minuet in G” composed by Edward Beethoven, “Imagine” by John Lennon, and “Just the Way You Are/Just a Dream mashup” from Pitch Perfect. With all songs sung acapella in four part harmony, these young performers had to stay especially focused as the spotlight shined on them.

However, even though these girls worked for weeks to perfect their melodies, their hard work was far from rewarded.

With the high spirits of the event, many of the attendees were enjoying themselves and were engaged in lighthearted conversation. Instead of pausing their dialogue to enjoy the show, the crowd perhaps thought their side chats were more interesting.

Maria-Elena Whitlock, a freshman member of the Quarter Notes describes her disappointment with the audience, “…We were so good that night, but everyone was talking.”

“I thought we did really well,” comments Rebecca Parrillo. “We practiced for this for weeks, [but] it feels like all of that was just thrown away, like it was all for nothing.”

Hilda Delgado, a senior member adds to Parrillo’s statement, “We perfected these fun songs in hopes of entertaining the auction-goers, but by the way they all spoke over us as we sang, I guess they didn’t really care one way or another if we only served as background noise.”

Although a good portion of the audience did not seem to acknowledge the presence of the singers, some attendees remembered that there were performers on stage to entertain them.

“…there was a small scatter of adults who were trying to enjoy our performance,” continues one Quarter Note who would prefer to stay anonymous, ”hushing others around them and reminding them of audience – performance etiquette.”

By tapping their glasses, shushing, and waving their hands to silence the other half of the room, they were able reduce the volume of noise for a small amount of time. Unfortunately, after a few notes were sung, the noise not only returned, but grew much louder, almost completely drowning out the young performers.

Whether or not the few who were still listening could hear the complexity and difficulty of the music is unknown, but the few still applauded the choir heartily and expressed their gratitude for the performance that night. Although the girls were grateful for their loyal listeners, they still felt a bit melancholy about the night.

“For our first performance in our new blue dresses, I think we all felt a little under-appreciated,” mused the anonymous singer, “Being polite, regardless of the skill of a choir group, is always a must.”