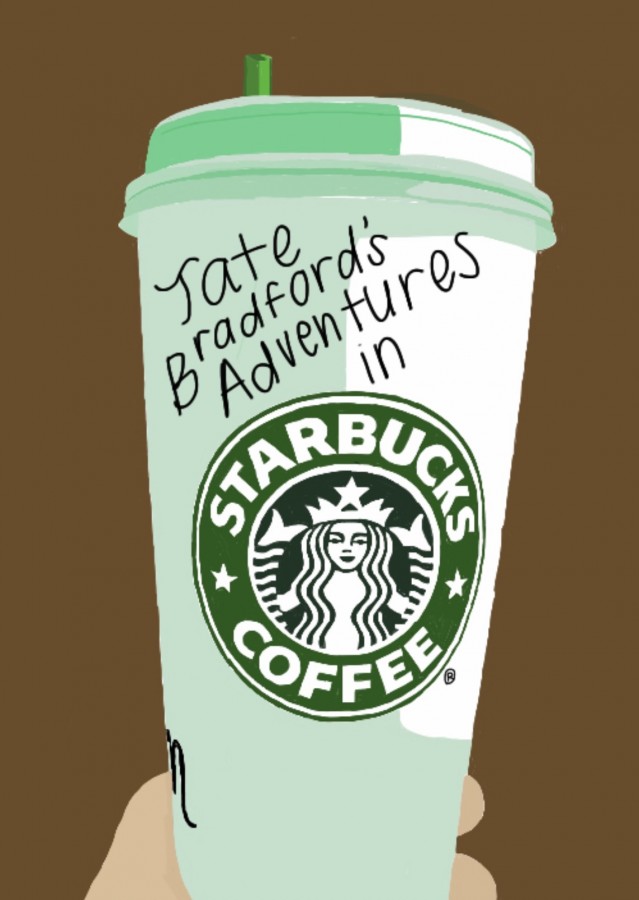 I attended a pre-college summer program at Harvard this previous summer where I took a college level class called “Writing Short Fiction”. Every night we would have to read assigned stories and write our own short stories. In class, we’d share our stories and discuss the assigned reading. The following short story is one of the first I wrote at Harvard.

“Welcome to Starbucks, may I take your order?”

“No, for the last time, you are too young to drink coffee!’

Words flew by my ears like flies. I took little notice of the people around me and honed my focus onto the large menu on the wall behind the baristas, which wasn’t really necessary since I already knew what I wanted. The line at Starbucks was especially long today, maybe because it was Saturday, or maybe it was because it was lunch time.

All I wanted was to get my black coffee as dark as my soul and a sandwich and get back to work. With a deep sigh, I took my phone out of my back pocket and checked the time. To my despair, I saw that I had only ten minutes left before I had to run back down the street to my dead end job as a clerk at the local bank. My boss told me if I was late one more time there’d be “hell to pay”. I wasn’t scared of him or his threats, but I needed the money. I couldn’t possibly continue to afford to live in my apartment downtown if I lost my job, not in this economy. The line started moving again after a middle aged woman with an orange tan and too much Botox stuffed her change into her designer clutch and hurried off with her grande triple latte or some fancy, overcomplicated name like that. I noticed I was now second in line, and I was relieved. My relief was short lived, sadly, when I noticed that the people in front of me were not people, but two young children.

“How strange,” I thought to myself. I’d never seen them before. I glanced around to see if they had parents waiting for them, but no one in the room seemed to lay claim to the girls. Seeing children with no parents, both no older than twelve, shouldn’t have been such a spectacle for me, but I guess I’d gotten so used to seeing only young adults and the occasional elderly person around these parts in the city that it struck me as an outrageous display. I wouldn’t use the word “dangerous” to describe the city I live in, but it’s still not safe enough for a kid to be walking around alone.

At second look, I observed that they were dirty, like they hadn’t taken a shower in a day or two and their clothes were past due for a cleaning. One was tiny, a girl who probably only came up to my waist, with long red hair pulled into high ponytail, and the other was slightly taller and slightly bigger with the same skin and with short plain, greasy brown hair stuck to the nape of her neck. They both wore the typical pre-teen brightly colored tank tops, the colors dull from dirt, and the shorts that weren’t short enough to really be shorts but not long enough to be bermudas or pants. I couldn’t see their faces, but I imagined they were freckled and untouched by wrinkles or the sun. I was close enough that I could hear bits and pieces of the girls conversation with the barista, and without shame I listened in. The barista was a round, sweaty young man with the name Josh sloppily scribbled on his name tag. The state of his name tag made me thankful that I had been issued a metal name tag with Tate Bradford printed correctly and neatly on it. I’d seen him here a few times before, he had taken my order enough times to know my name. I was a regular here. I was used to seeing Julia, who is kind and pretty, behind the cash register. I bet she could’ve handle the little girls well.

“What I’ve always wanted to know is, how do baristas and cashiers and everyone of that line of work deal with children and their complete lack of sensibility?” I questioned myself. I can barely contain my rage when there are reckless kids in the line at the bank causing trouble. “I should’ve been a writer” I thought to myself for the hundredth million time in the past five years since college where I majored in a useless business degree. The heaviness in Josh’s sighs was a tell-tale sign that he was not paid well enough to deal with kids.

“You can’t get those with just 53 cents” I heard him say.

I deduced that the girls were trying to buy drinks but were lacking cash. I considered for a moment being a hero and buying their drinks for them, but then I decided against it.

“But that’s all I have!” The red-headed girl whined in a high pitch voice.

Josh rolled his eyes so far back into his head that I was afraid they’d get stuck there.

“Look, kid, do you want me to call your mothers or something so she can buy you guys them?” He said.

The girls shrunk back from the counter almost as in shame.

“But I’m thirsty and so so hungry” I heard her brunette friend whisper to her.

Her voice had grown so small and so sad that for a second I felt bad for her. They were both probably homeless or runaways. There were a lot of them around here. I stopped caring and got back to the real issue at hand. I wanted my coffee and my food.

“Girls, I can’t let you buy the Hibiscus Tea and Panini’s, but what I can do for you is get you glasses of water”, Josh said.

“But I haven’t eaten in two days!” The brown haired girl blurted out.

There was a pause. Something changed in Josh’s voice.

He said something I didn’t quiet catch.

He disappeared for a moment behind the counter and returned with two teas and two sandwiches. His sudden act of charity took me by surprise. I watched as the two girls snatched up the drinks and food. They must’ve tried to offer him money, because Josh held up his hand and shook his head.

What struck me to be the most bizarre thing about this situation was that there was no hint of care nor kindness in his voice. Josh wasn’t acting as if he was doing something out of the ordinary, he was acting as if what he was doing was ordinary. The two girls ran out of the store and Josh gave an extensive sigh. He put on his best fake smile and looked at me, his next customer.

“Hey, Tate!” He said with a voice as phony as his smile, “What can I get for you today? The usual?”

I smiled, not because of his false kindness, but because I was finally getting my coffee and food, and stepped towards the counter.

“Good afternoon, Josh, always nice to see you”, I lied, “and yeah may I please have my black coffee and turkey sandwich?”

I paid for my food and I watched as Josh began to make my coffee and then prepare my sandwich. In all the time I watched him, I couldn’t help but think of what he had did for those girls just moments before I ordered.

Josh looked up from the coffee dispenser he’d been leaning over.

“You know those two girls that you just helped out?”

Josh took his focus off the coffee dispenser and looked at me.

“Yeah, the homeless-looking ones, right? Why do you ask?”

“Um…” I paused, “I was just wondering, why did you do it?” I found myself asking.

Josh shrugged. “I dunno, seemed like the right thing to do?”

“Right thing?” Josh and I must have different views on morals. Knowing myself, I would’ve just told the girls to scram.

“Yeah,” He said matter-of-factly, “I mean, you saw them, they looked homeless, they probably were homeless. So what some tea and sandwiches goes missing? Not like Starbucks needs any more money”.

Josh had lost my interest at I’d, but I felt like I’d gotten enough of his point to understand what he had done from his perspective. At this point, he’d made my coffee and my sandwich, so I took them from him and waved a good bye.

“Thanks, see you soon, Josh!” I took my order and walked away towards the exit.

“Bye, Tate”. I heard Josh say behind my shoulder.