We Need To Talk About Claude 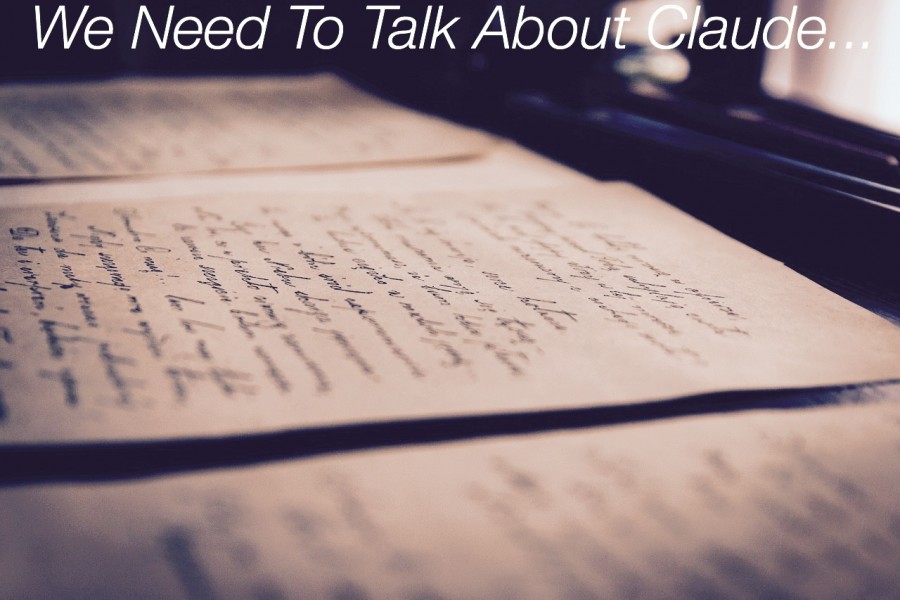 This is a photo edit by Gracie Hancock. The original photo was taken off of Pixabay, a website where thousands of non-copywrited photos are available for use.

This letter is of the most urgent matter. It was a complete shock to wake up Saturday morning to have my maid Rebecca tell me my youngest brother, Claude, was waiting for me at the front door with his things. She said he had told her he was here for a surprise visit. If my loving husband was here and not off in London for business, I know he would’ve told Claude to leave, but I let my sibling instincts get the better of me and I let him inside and invited him to breakfast. It was there he told me two very interesting things. One, that you had sent him here to stay with me, and two, by far the most ridiculous thing I’d ever heard, that he had a big cat tied up outside. Apparently, it had gotten its paws muddy and sweet little Claude didn’t want it to ruin sister’s prized Persian carpets. He insisted on having the servants to go outside and tend to it as soon as breakfast was over. Of course I couldn’t refuse him, so I sent Cuthbert and Alfred, you know them, the two large cousins from Sussex, to fetch the animal and clean off so it could be kept in the servants corners with the other cats. You know how the mice get. Well, not five minutes later, they come dashing back inside, scared half to death. Remember, this is Cuthbert and Alfred we are talking about. Then, they start rambling on about the animal, calling it a red and black beast with long ivory fangs and so on. The rest is too impolite to write in this letter. I immediately dismissed the maids and sent the servants to lead the beast of a cat into the barn. Then, I had a little chat with Claude about his new feline friend. I asked him what kind of cat it was, and do you know what he told me? He said rather innocently, “Sister, my friend told me it was a “tuh-eye-gurr”. Do you know what kind of cat that is?”. It took me a moment to piece together what he had so horribly pronounce, but then it hit me. He said tiger. He brought a tiger to my home. A tiger!
Clarence, we need to talk about Claude. How did he even come to acquire a tiger? This isn’t the first time he’s done something like this, no, this is just the tip of the iceberg. Two years ago it was that vagabond of a woman Evangeline whom I know wasn’t really a woman, last year it was the impromptu trip to “explore India” because “he very much liked the name”, and now this! What will it be next year, Clarence? A lion? An elephant? He doesn’t even understand what those animals are. I am hesitant to send him back to your manor because I’m afraid this will all just become a game of catch. I suggest that we send him to Aunt Ethel’s, because lets face it the poor woman’s been half dead for over a decade now. If nothing else, then I say we send him to stay at an asylum, really any one would do. I know that is rash for me to suggest, but truly I can’t think of anything else. Only if mother was still here, she’d know how to deal with him.
My patience has run thin. The tiger, which he requires everyone to call “Theodore”, has already scratched up the walls of the barn past repair, eaten five chickens, injured two horses and three servants, including Cuthbert and Alfred who have both since resigned from their services and have moved back to Sussex. Claude and that tiger need to leave, but I can’t get rid of him myself.

Please respond as soon as possible.

I am deeply remorseful for sending our youngest brother to your estate on such short notice. You see, I would’ve normally sent him to mother’s. However, since she’s passed, I quite frankly don’t know what to do with him. I wish I would’ve thought to send him to old Aunt Ethel’s, but sadly that thought did not pass my mind. I am more than willing to pay for any damage that the tiger caused to your estate and to care for the injuries it caused your servants. You must understand, I suffered just as you did when Claude showed up at my doorstep in the middle of the night. I too let him stay at my manor and let his tiger stay in my barn. As a result, six of my chickens are dead, my barn is ruined, all of the help has been scratched up, three servants have up and left, three of five of my horses are injured, including my best race horse Frederick. You know how much I adore my Frederick. That beautiful horse made me thousands in the races. And now who do I have race? Kenneth? With those short legs?
Oh sister, forgive for my digression. I am under a great strain. My neighbors, the Blake’s, want my head. I tried letting the tiger loose, hoping it’d run away and never bother my home again. That went terribly. Luckily, the beast didn’t kill anything of the Blake’s, but it did ruin Mrs. Blake’s prized rose garden and she is furious. You can imagine how much of an embarrassment it was to wake up to find Mr. and Mrs. Blake at my door with a few of their bigger servants. Their servants had herded the tiger back to my barn and trapped it in there. I explained to them my current predicament concerning Claude, and they too were appalled with the mystery behind how he had come across such an animal. Please don’t ask me how Claude came to acquire the tiger, for I do not know. That’s what I also explained to the Blake’s. Every time I ask Claude, he just starts rambling on about his black haired friend with the many pets. Then, he asks me if he could get more pets so he could be like his friend. Obviously I answer no every time. Clarissa, dear, you know how he is. He comes and he goes. He stays at one of our manors for some time, then goes off to God knows where, then comes back in irregular intervals. He has no estate of his own and no money to his name that doesn’t come from this family. Claude is an embarrassment to the Clemens name and should be dealt with. I agree whole-heartedly that he should be sent to an asylum. There is one I know of in the next town over that should be suitable. As for the tiger, I connections at the Smithsonian National Zoo. I could get the beast set up there in an exhibit and we’d never have to worry about the horrid thing ever again.

Please don’t worry too much, sister, this whole matter will be swiftly resolved.