Competition Thoughts at a Speech and Debate Meet (VIDEO) 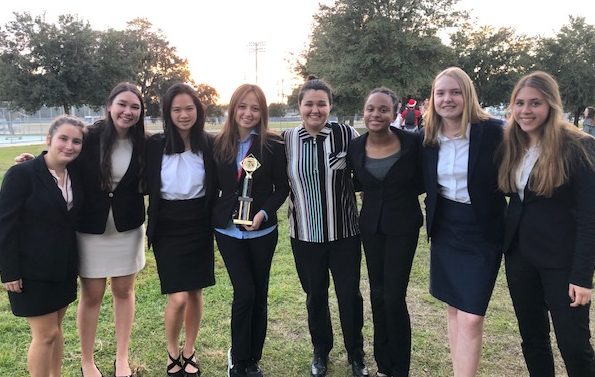 The competitors of the Academy of The Hoy Names Speech and Debate Team get in a picture after a lengthy meet. The competitors are eagerly awaiting the critiques from the judges and how they ranked.

The Academy of The Holy Names Speech and Debate Team competed on December 7, 2019. The competition took place at Newsome High School and lasted from 7:30 a.m to 6 p.m in the evening. My specific event was Oral Interpretation, in which the competitor is asked to perform either their prose or poetry. The piece has to be a maximum of ten minutes, and the competitor can look at their binder, like they’re telling a story. At this competiton, poetry was first, and then it alternated. Even though the day is long, it is filled with a lot of downtime in between the four rounds. The competitors patiently awaited for the awards ceremony, the overall winners of the four rounds. Two Academy students won awards, Sarah Munera (’20) for Oral Interpretation in first place and Adriana James-Rodil in second place. This video takes you through the thoughts of a competitor, me,  as the day goes on.