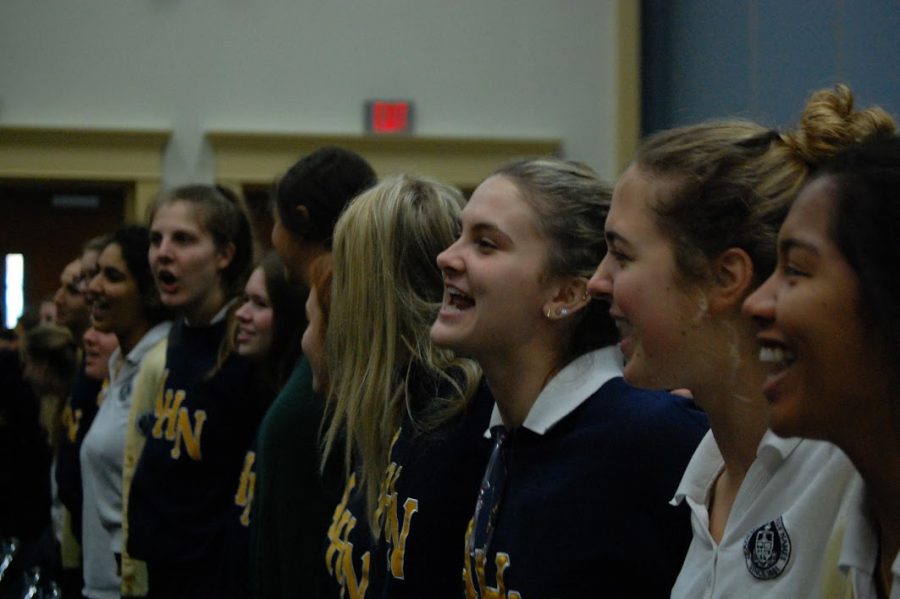 Credit: Gabrielle Hogan (used with permission) Isabella Bahr (’19) said, “I think convocation is a great way to come together as a school and have some fun.”

On Monday, Jan. 29, 2018, all members of the student body and faculty gathered in the Brady Center North for convocation.

During convocation, the AHN student council was performed a skit to further explain to the student body, what the school motto for the 2017-2018 school truly means. The motto this year is, “Embracing tradition, celebrating our sisterhood.”

Principal Stephanie Nitchals followed the council members with informing the rest of the student body with upcoming information and the week’s student shout outs.

Nitchals then reminded students of the week’s upcoming activities due to it being Catholic Schools Week. From Poetry Out Loud, to Community Service Day, to even Jag Ball, AHN’s student body is sure to have a jam-packed next few days.

To keep the students interested and involved during the convocation, student council members gathered four people from each grade to form four separate teams: Embrace, Tradition, Celebrate, and Sisterhood.

The four teams finished off the tenth and final round with a three way tie between the Embrace, Celebrate, and Sisterhood teams. To break the tie, members of the Student Council decided to perform one last charade to crown the final winner. In the end, team Embrace guessed the final charade and won the competition.