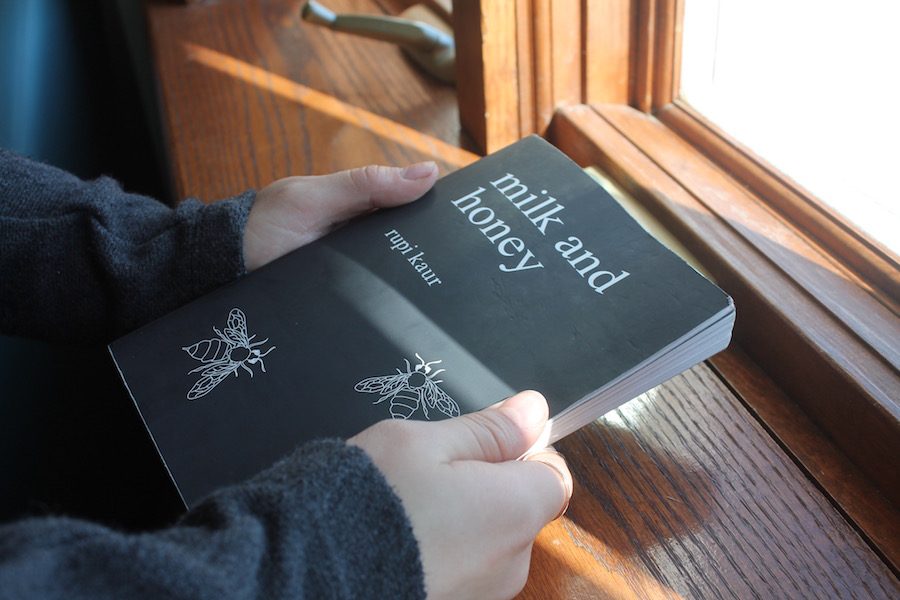 Rupi Kaur writes in an iconic all lowercase style, and the only punctuation she uses are periods. This is because Kaur’s native tongue is punjabi. The written form of punjabi is called gurmukhi. In gurmukhi all letters are what English speakers call lowercase. In addition, the only punctuation used is this symbol: | which is equivalent to the English period. Kaur says the lowercase letters are “a visual representation of what i want to see more of within the world: equalness.”

This is Rupi Kaur.

She is a twenty four year old punjabi sikh woman who was born in India and lives in Canada. She began writing seriously in middle school, and published poetry on a blog in high school and college. She was a natural illustrator and took visual art classes throughout her educational career. Kaur was looking for a way to merge writing and art, so after being discouraged by professors, publishing companies, and magazines, Kaur, according to the faq page on her website, decided to Youtube search “how to lay out a book in adobe indesign” and do it herself. And thus her first book, milk and honey, was born.

Milk and honey is a collection of poems presented linearly about womanhood, tragedy, betrayal, self-discovery, and love. Kaur is honest in the presentation of her life experiences, leaving no fluff to distract from her pain and healing.

Senior Lizzie Dolan is an avid poetry reader, and dabbles in writing herself.

Having read milk and honey three times in the past two months, Dolan says, “It’s taught me the power in simplistic poetry, and how oftentimes less is so much more.”

Dolan also says, “I think it shows us that we’re not all so alone in how we feel, in certain ways. And also that there’s so much power in being vulnerable. And when you accept your vulnerability and when you use it as a tool and as a weapon, it’s amazing. And that’s kinda what she did.”

According to a recent Instagram post, Kaur is putting the “finishing touches” on a new book called love and light.

Dolan says “I died. I’m still dying. And I will be resurrected when I read it.”

The reaction to Kaur’s announcement has been overwhelmingly positive.

Kaur has not released any additional information about love and light since her Instagram post, she only reports to be “almost at the second finish line.” Kaur’s poetry, despite initial resistance from publishers, has found an audience in women, young and old.