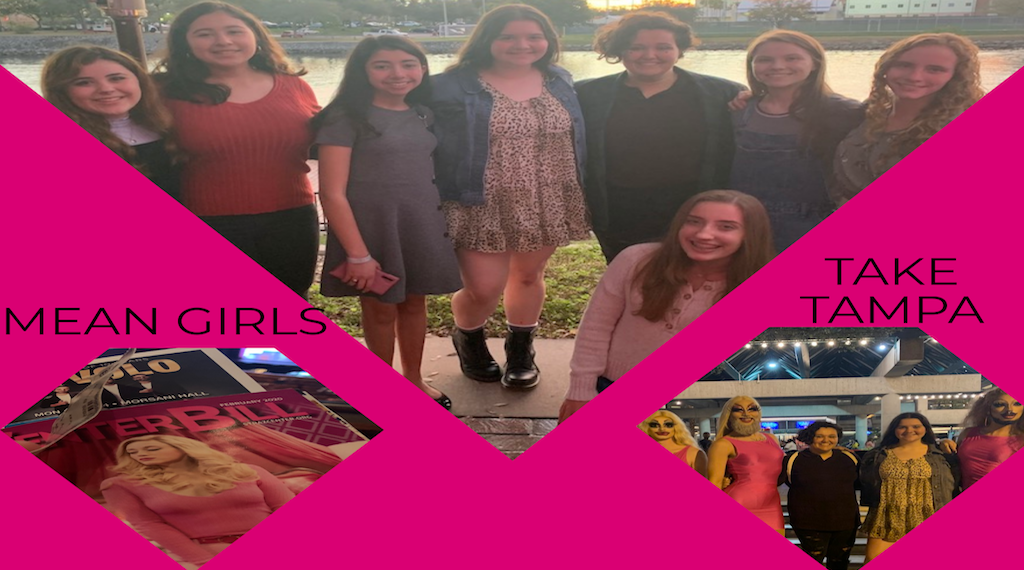 Mean Girls played at the Straz Performing Arts Center on February 19,2020, with the Academy Girls of the theatre club at the pre-show. (Photo Credit: Sawyer Salgado/Piktochart)

Mean Girls played at the Straz Performing Arts Center on February 19,2020, with the Academy Girls of the theatre club at the pre-show.

On February 19, 2020, the traveling tour of Tina Fey’s “Mean Girls” took the stage of Tampa’s Straz Center. Jeff Richmond, her husband, helped compose the songs for this musical. The movie-turned-musical features the main character Cady Heron who is a new student at a high school in Chicago who befriends three “apex predators”. The movie focuses on the overexaggerated expectations people have of high school and the fake friendships that often occur.

Georgia Head (‘22) said, “My favorite characters were Gretchen and Karen, I liked how they made their characters more complex. They had sides to them that the movie didn’t portray.”

Alaina Salathe (‘23) said, “Damian was my favorite character because he is relatable and a good comic relief. He also helps guide Cady through her first day in high school.”

The singer and actress that stood out to Julia Dean the most was Mary Kate. She played the grunge artist, Janis, who helps Cady take Regina George down. Her voice was very unique and raw in power. Dean (‘23) said, “She is inspiring because she noticed who her real friends were and knows who she is. She’s honest to herself.”

The lesson in this musical is to be yourself. People who are portrayed as terrible and materialistic actually have deeper thoughts and there is more to their story than the surface level.

Olivia Martinez (‘21) said, “My favorite characters in Mean Girls are Regina George and Janice. I loved seeing how Regina’s character developed throughout the show. I feel as if Regina had the best songs in the show especially because of the strong vocals. I loved Janice because she is very confident and doesn’t care what anyone thinks of her. Both characters are amazing and have incredible songs in the musical.”